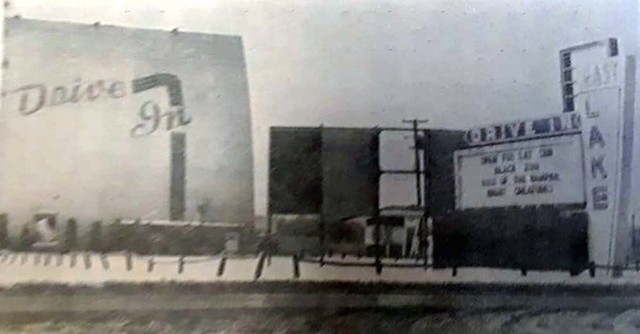 A Wal-Mart occupies the site of the former Eastlake Drive-In, as well as a small shopping center. Prior to Wal-Mart, a Wholesale Club, later a Sam’s Club, occupied the building constructed after the drive-in closed.

EastLake Drive-In opened in summer of 1950. It could hold 1,000 (16 ramps) CARS. The Concession Stand had 50 Seats in case it rained. Later in the 60’s the seats were removed to make concession bigger with two lines to server people faster. The play ground had two (2)sets of swings (w/8 swings each), two (2)sliding boards, and a merry-go-round that you would push, it also had a coo-coo TRAIN w/3cars to pick-up children from the cars & bring them back before the movie would start. (The TRAIN stopped in 1969 for insurance reason) ! IN 1960’s they open a MINIATURE GOLF & GAME ROOM, for family to come early and have fun, before the movie started & continue until the Drive-In closed. 1975 started a FLEE MARKET on Sat.& Sun. from 8AM til 5PM. it would bring about 100 sellers & around 1,000 Buyers , which continue until closing. On the 4 of July you could see the fireworks from North High School, down the street from over the screen tower. (that was FUN). THE EASTLAKE DRIVE-IN CLOSED FOR GOOD In NOVEMBER 1986……. Sign…..HeadUser Mike Barnhart (1974-1986)……. P.S. I’ll add pictures when I find them…

Here is a May 1963 ad from the Willoughby News-Herald:
http://tinyurl.com/p74mkf

My 1956 motion Picture Almanac has it parking 500 cars and was owned at that time by East Lake Drive-In Theatres.

I worked in the concession stand during the mid-to-late 70s. I particularly recall the pizzas we used to make with their cardboard-like crust. They were awful, except for the pepperoni, which we would snack on occasionally by grabbing big handfuls from the giant plastic bag it shipped in. We made popcorn up until the movie started and just before intermission, whether we needed to or not, just to get the aroma permeating inside the stand and out — the hope was to make people hungrier. Heat lamps kept all prepared food warm, but they also attracted all sorts of bugs which would die and fall into the food. As phil2039 writes, the concession stand did have two lines but rarely operated at the same time unless we had a big draw, like Smokey and the Bandit (three nights of sellouts). The operator didn’t use a cash register or adding machine — prices were added up in the cashiers head! I was asked to this occasionally, and can attest, it’s very difficult. Besides being quick in addition you had to know all the prices by memory. And when someone questioned the total you had to do it all over again. I can still picture my co-workers, the ushers, the GM (wore the worst rug ever), the owners and the ticket-taker but am at a loss for their names. Hi to you all. It was a great time in my life and I had fun knowing and working with you all.

My brother worked there and drove the train. Hilarious. He also had to get kids parked past the movies end to leave. I was there as a kid and then later took dates there, Euclid Drive Inn and Mentor Drive inn on a regular basis. Cheap date and fun in the back seat. If you wanted pizza you picked one up from Biagios on Vine street a mile or so toward Willoughby. Sure wish they still existed, although it wouldn’t be as much fun as it was as a kid and teen.

Biagios is still there…but those drive-ins are not. There have literally been not one, not two, but THREE different Wal-Marts there. The original was torn down when they built a bigger new one that opened in 2002 just to the west of the original. Then within the last 5 years they moved into the old K-Mart which was just west of the most recent Wal-Mart and call it a Supercenter…which is the smallest Supercenter I have ever seen.