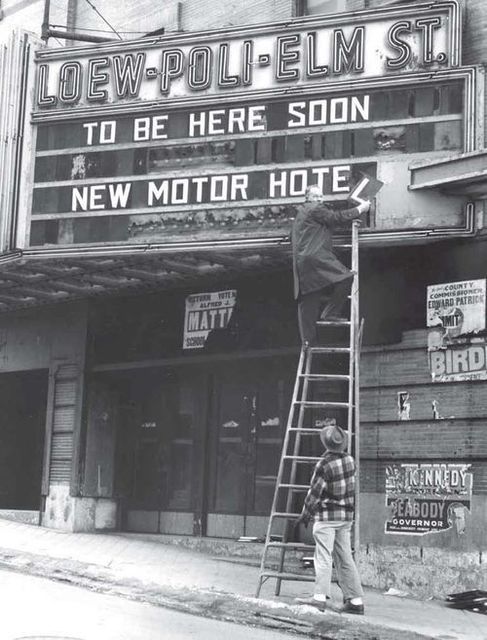 The Poli Elm Street Theatre was opened in December 1912 with 2,476 seats. By 1941 it was operated by Loew’s Inc. through their subsidiary Poli New England Theaters Inc as Loew-Poli-Elm Street Theatre.

Boxoffice magazine, September 18, 1948, carries a piece about a Regent Theatre on Elm Street that was being demolished that year. I have not found it listed on CT.
View link
(Item is in the “Worcester” section.)

This photograph of the Fox Poli (aka Elm Street Theatre) was taken in 1929 by George Mann of the comedy dance team, Barto and Mann.

Thanks for the photo Brad.

Thank you for the correction, swellshades. I will re-label the photograph. It may be worth noting that “Fox-Poli Palace Theatre” is not included among the aka’s for the Hanover Theatre for the Performing Arts. “Fox-Poli” is on the vertical sign and an ad in the “Worcester Evening Gazette” for September 9, 1929 identifies the theatre as the “Fox-Poli Palace.”

It is the only photo I’ve seen that shows the Poli Palace during it’s brief life as a “Fox”, so I’m glad you posted it. The Elm St. Poli was demolished when I was in high school. I haven’t found any photos of the facade, but here is a link to a 1925 drawing of the bldg.:
View link
It is one of 286 theatre facades done by Anthony F. Dumas in the 20’s and available in the volume “Theatres” by Craig Morrison (Norton,2006).

Thank you swellshades for the reference to Morrison’s book. Our library has a copy and I’m looking forward to going through it.

Worcester Magazine published this article about S.Z. Poli and his new theater on Elm Street in its issue of December, 1912. There are photos of both the facade and the auditorium.

swellshades: The captions of the Dumas drawings in Morrison’s book often give the name of the architect of the theater depicted. Is that the case with the drawing of Poli’s Elm Street?

The article in Worcester Magazine I linked to in the previous comment says that Poli’s Elm Street Theatre was a project originally to be called the Lincoln Theatre, though it never operated under that name. The builders of the new house, the Worcester Amusement Company, ran into difficulties partway through construction and the theater remained unfinished until Sylvester Poli bought it and completed it in 1912.

The letting of contracts for the Lincoln Theatre was noted in the August 13, 1910, issue of The American Contractor:

Multiple period sources indicate that Poli kept Leon Lempert Jr. on as architect (Lempert Sr. had died in 1909) after he took over the unfinished project.