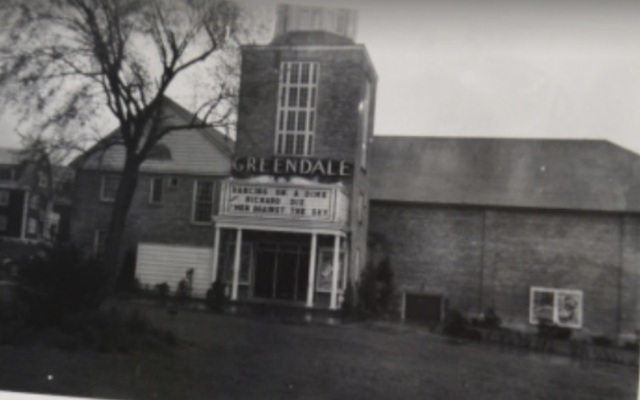 The Greendale Theatre was an attractive brick cinema which was apparently located in the Greendale section of Worcester. It opened in 1938 and had a distinctive tower at the front. Further information welcomed.

The Greendale Theatre was included in the MGM Theatre Photograph and Report project. There is an exterior photo dated May 1941. It was a brick building 3 stories high. There was a handsome tower which contained the marquee and the entrance. The tower had a tall glass window and, at the top, a glass structure similar to that at the top of a lighthouse. The marquee had “Greendale” at the top in neon-outlined letters. Attractions were “Dancing on a Dime” and “Man Against the Sky.” There was a large tree to the left of the entrance- the theatre was not downtown. The Report states that the Greendale was on Barker Avenue, that it had been showing MGM product for 2 years; that it was built in 1939, was in Good condition and had 754 seats and attracted a “Class” patronage (meaning “high class”). Today, the USPS Zip-code locater does not have a “Barker Avenue” (or Street, Road) in Worcester.

I found this quote referencing the Greendale by a
writer, Nicholas Gage, in a book titled “A Place for
Us” 1989 Houghton Mifflin which talks about growing up
in postwar Worcester:

“I studied the movies for insights into American
culture and real life, and they inspired dreams I
never could have dreamed in my Greek village, where my
wildest fantasy had been that the winter snow would
turn to flour or sugar and we could all have enough to
eat. In America, the movies taught, there is so much
luxury and opportunity that anyone—-a shoeshine boy,
a farm girl, or an orphan—-can become anything:
president, tycoon, radio singing star. In the gloom of
the Greendale Theater I realized that if I just played
my cards right, I could be anything from a mafioso to
a matinee idol—-a revolutionary idea to a refugee
from an impoverished and class-dominated country.”

I think this may actually have been on BARBER AVENUE, which is in the Greendale neighborhood and does exist.

Both yourself and Ron Newman always say that the MGM Theater Reports are notoriusly error-ridden and hard to read. I think this is one of those cases. Unfortunately, if it was there, it’s long gone. However, looking at the aerial on Google Maps, it looks very plausible that there was a theater there – the location, at least, makes sense. But I could be wrong. And there seems to be little information on this theater.

Phantom- “Barber Avenue” vs. “Barker Avenue” – this is the classic kind of mistake which occurs on the MGM Reports. So you are probably correct. It apparently was a very nice contemporary-design neighborhood movie theater.

Yes, indeed. The Greendale Theater was located at the intersection of Barber Ave and Route 12. When I was about 12 years old, I used to walk from Drury Lane to the theater (about a 2 mile walk) to take in matinees (about 25 cents I think.) It was a neat, clean, friendly, comfortable movie house. That is a sweet memory.