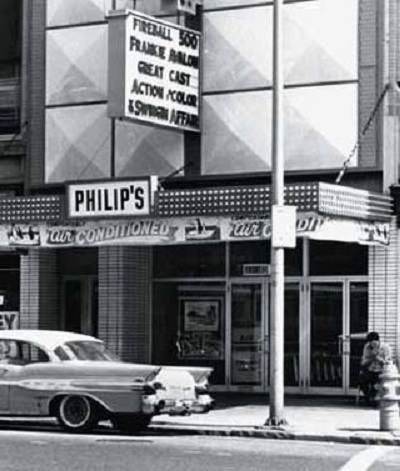 The Family Theatre is listed under E.M. Loew’s Theatres in the 1942-43 Motion Picture Almanac. Other Worcester theaters operated by EML at that time were the Olympia (Art), Plymouth (Palladium), Regent, and Royal.

In the 1927 Film Daily Yearbook the Family Theatre in Worcester is listed as having 1,000 seats and open 7 days per week.

The Family Theatre was listed in the 1916 Worcester City Directory at 122 Front Street. There are a few photos on this page. There’s also a comment from someone who says he attended the theater in the mid-1960s.

If the building was still standing in 1969, it was certainly then demolished to make way for the Worcester Center Galleria, an enclosed mall which is itself now being demolished.

When the Galleria was built, the block of Front Street on which the Family Theatre was located was closed, and the street bent at a 90 degree angle, so the marker on the Google Maps view doesn’t show the actual location of the theater. The project replacing the mall will reopen Front Street, so eventually the address at least will be returned to its original location.

The 1916 directory, by the way, lists fourteen theaters in Worcester, most of which are not yet listed at Cinema Treasures.

Thanks again Chuck,Great stories.Can’t believe all the Rat stories,Hey, Did “WILLARD” and “BEN” play there .LOL.

In the early 1960s the Family Theatre had become re-named the Philips Theatre.