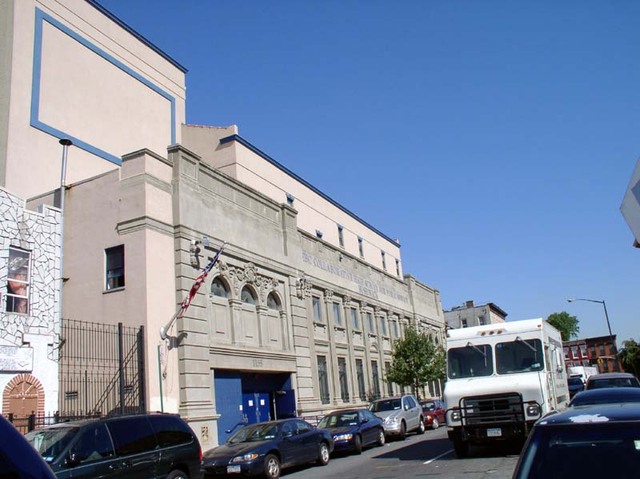 The DeKalb Theatre was opened on December 18, 1911 with 2,500 seats. The architects were Harde & Short. It had a 40 feet wide proscenium and a 40 feet deep stage. There were 22 dressing rooms. It was closed in July 1913 for extensive alterations and improvements, and was reopened by the Shubert Brothers, presenting plays direct from New York’s Broadway theatres. In August 1915, it was taken over by Marcus Loew, and was renamed Loew’s DeKalb Theatre presenting vaudeville and movies. It was equipped with a Moller 3 manual, 16 ranks organ in 1917.

It was closed in 1930, and was unused for several years. It was renovated and reopened in the summer of 1936 as the Casino Theatre. Seating was now provided for 1,600 presenting burlesque. It was closed down by the city authorities on May 1, 1937, after having it licence denied.

The DeKalb Theatre reopened sometime later in the 1930’s presenting opera and ballet programs. Seating was now given as 2,600. The DeKalb Theatre was finally closed in August 1947, and was offered ‘For Sale’ in February 1947 with an adaptable use for manufacturing.

In recent years it has been converted into a high school.

Like Fenando I took the “nickleless tour” when i was about 10 years old in 1968. The largest theater I ever seen. Too dark to appreciate the decor. besides what 10 year old knows from gothic nor french revival. Spooky is what I remember most. So much space. The stage appeared to be so far away from the top of the balcony.

this place must have been some kind of business in the 60’s.
I won’t swear to it but I’m so certain that around the time the mets were winning the world series that place caught fire. I recall as if it were yesterday how I and a couple of pals joined in with some of the older guys from the neighborhood and went shopping through the charred remains. toys, dolls for my sisters is what I recall.

No I’m not suggesting that this was Bargaintown. I don’t remember a bargaintown. And Buy Rite was on a whole different block.

I do have a tenant thats in her 80’s, has been living in the same place since 1932 On Dekalb ave and she averts that yes they had vaudville shows, italian shows and it was in fact bargaintown.

Jayar, while I thank you for posting these pictures, they apparently have been blocked and cannot be accessed. Hopefully, you will be able to resolve this problem.

Jayar’s pictures now come in fine and are great. This was probably just a temporary thing.

Oh good, like I said, I had a strange thing happen a few weeks ago, where photos didn’t show up, and a system restore solved the problem. I never figured out what it was.

Here is stunning 1940 photo of the Casino Theater, operating as a theater. Unfortunately, I can’t find the actual tax photo of the building, but the next two links are of the adjoining buildings, which show it pretty well.

Thanks for posting these old pictures.