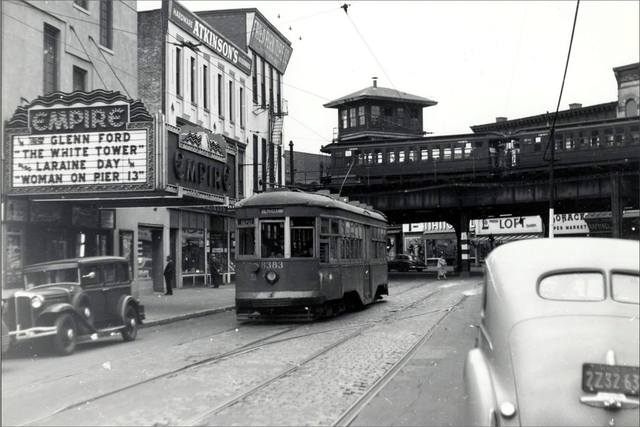 The Empire Theatre opened on August 24, 1908 with “The Star Show Girls”. It was located in the Eastern District of Brooklyn, close to the Bushwick Theatre. It featured low vaudeville and by 1910 was a burlesque house.

Other theaters featuring burlesque in the World War I period along with the Empire Theatre were the Gayety Theatre at Broadway and Throop Avenue, the Star Theatre at Jay Street near Fulton Street, and the original Casino Theatre at Flatbush Avenue and State Street.

All these theaters would show movies at times. After Mayor LaGuardia closed the burlesque shows, the Empire Theatre was showing double features as a neighborhood house after they had played the nearby RKO Bushwick Theatre and Loew’s Gates Theatre. It may have switched before the ban, does any one know?

It was equipped with a Wurlitzer 2 manual 8 ranks theatre organ in September 1927, but this was removed in 1931. The Empire Theatre was closed in 1953, and was served by the Broadway trolleys as well as the Ralph Rockaway Car line and the “El”.

Thanks, Joe From Florida, for posting your Bklyn memories.

Thanks, Jayar1 and Bway for the links.

Bway, that’s a great shot of the Empire. I’ve seen it before.

Does anyone know of any historic exterior photos of what the building used to look like? I have seen marquee shots, but was wondering about the rest of the building. Unfortunately, it’s quite ugly architectually today, with an ugly stucco exterior.

They are looking at an old 4500 convertible trolley on a fan trip. At this point there was a switchback where double end cars could change direction. It dated from a time when people comuting to and from the City could ride the EL from Park Row in downtown Manhattan and take the Lexington Ave. EL to Broadway, then board the Cars on Ralph and homeward. The Cars coming down Broadway from Williamsburg were already loaded during the rush hour and so extra Cars from Canardie Depot were run up the line, loaded and switched back by the Empire Theater. A starter over saw the operation and helped pre collect fares with a portable fare box on the street at the normal exit doors to speed up the operation.

Thanks for the information!

My posting, two comments up, should read Canarsie Depot, not Canardie.
Sorry for the typo.

Hi – I just learned that my great grandfather helped build this theatre. He was a cabinet maker and built extraordinarily ornate tables, so I would guess he was involved with some of the finishing/artwork kind of stuff. Is there a way to find out anything about that?

I am going to try and visit the church that calls this building home. I want to take pictures of the interior to post them here. I guess I should first ask permission from the pastor.

That would be wonderful to see!