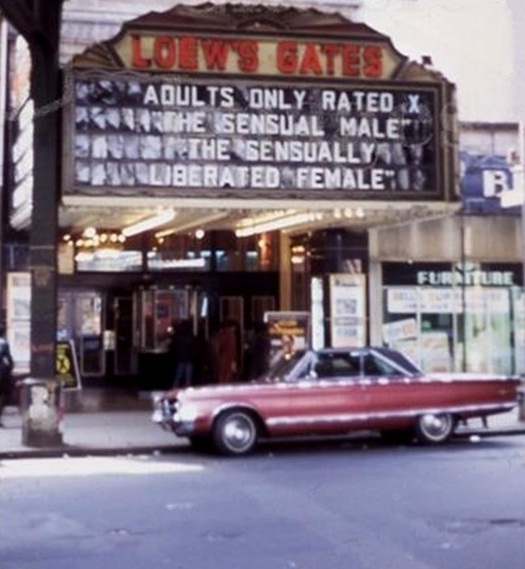 Purpose built in 1921, as a movie/stage presentation theatre, the Loew’s Gates Theatre was opened on November 21, 1921 with Bert Lytell in “Alias Lady Fingers” & Buster Keaton in “Hard Luck”. There was vaudeville on the stage and opening night was attended by a host of movie stars. It was equipped with a Moller 3 manual 17 rank theatre organ. This large and still well-maintained Loew’s house was one of Broooklyn’s many Broadway theatres that are now either closed or gone. It closed on July 13, 1977 as a movie house.

Today the theatre is restored and well maintained by a church that currently uses the theatre.

I sent an email to Pilgrim Church asking if I can tape some photographs.

Since this is a large and prosperous church – and they certainly need the space to serve their parish – I would not expect them to move anytime soon – unless, of course, they want to make a fast bundle.

This one opened on November 21, 1921. The feature film was “Alias Ladyfingers” with Bert Lytell.

True, John. One full photo of the theater shows “The Pawnbroker” which was a big hit in the 1960s. What I also found interesting in this photo is that the entire theater is on Broadway. Generally, only the entrance would be on the main street and the auditorium in the back. Full Broadway frontage would cost a lot more taxwise than just a small entrance.

Actually, most of the theater other than the entrance is not located on Broadway. In fact, the Gates once featured a separate entrance situated around the corner – I believe on Gates Ave. A large portion of the old Bushwick RKO, on the other hand, did front on Broadway. This might have been a reason why it closed first, though property values on Broadway were plummeting during the 1960’s and 70’s.

The photo with “The Pawnbroker” on the marquee shows the Gates Avenue side of the building, not the main entrance on Broadway. The marquee and poster cases on Gates Avenue were “just for show,” with doors that were exits from the auditorium. Photo linked here

Just posted another out of the tax photos. Left side Broadway