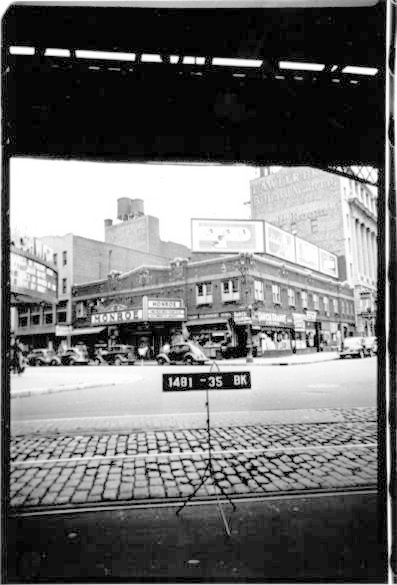 The Madison Theater was closed by the 1920’s already, it didn’t even last into the 30’s. The building may have remained, but of course would have been used as something else. It was not a large theater, only a 500 seat silent movie theater, nothing too elaborate.
I am sure there are people that don’t even remember the Schubert/Century Theater right next to the Monroe, as that too closed in the 1930’s, and that building was hard to miss as it was monstrorous, and lasted into the 1970’s, even though not as a theater. So it would have been very easy to “miss” the small Madison Theater which was closed by the 1920’s.

Thanks for the explanation, Bway. Yes, the former Schubert / Century theatre IS (was ?)hard to miss !

It was open in 1945, according to the yellow pages of that date. The all-important phone number was FOxcrft 9-2027.

Nice colection, but you should note when you upload photos on another site that they aren’t your photos. 4 of the current photos of the RKO Bushwick Theater are my personal photographs, which I posted here on cinematreasures. It’s okay, but you really should credit those who took the photos.

That being said, you said “back in the day” photos, did you find some historic photos of the Monroe Theater?

Unfortunately, the old Monroe is still a vacant lot, even though the old Cenury Theater site has new homes on it, which is right behind where the Monroe was. HEre’s a street view:

Also I believe that is the Century Theater on the right Tinseltoes.

Yes. There were three theaters here, all right next to eachother. Actually, there were 4 at one time. The Madison Theater, a small, little known theater used to adjoin the RKO Bushwick, to it’s left at the corner of Madison and Broadway…. It’s listed here on the site under Madison (not to be confused with the RKO Madison in Ridgewood on Myrtle).

Above link to Google Book resource relating to B.F. Keith’s and Monroe Theatre.

I grew up in this neighborhood, back in the early 80’s. My mother told me about the Monroe, as well as the RKO Bushwick (Bela Lugosi made a personal appearance at the RKO.) What I remember is a big empty lot, and trying to imagine where the theater was in relation to the Bushwick. Now I see it was actually more on Howard than on Monroe. The RKO Bushwick is that marquee that’s jutting out of the extreme left of the photo. The metal structure on top of the photo is the ubiquitous “J” train.