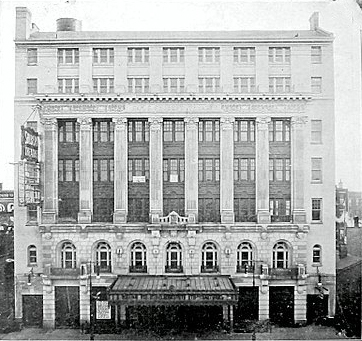 This theatre was once one of the most important in the Bushwick section of Brooklyn but is virtually forgotten today. The entrance was on Monroe Street, near the intersection of Broadway and Howard Avenue. Built and owned by realtor William J. Buttlings, it first opened as the Sam S. Shubert Theatre on October 17, 1910. With Shubert bookings of plays and vaudeville, the theatre was a big success until competition arrived a year later with the openings of the nearby DeKalb Theatre and Bushwick Theatre.

In 1928, Leo Teller retired at age 69, and a new management took over the Shubert Theatre. Changing the theatre’s name to Century Theatre, they tried various policies of vaudeville and/or movies, but could not compete successfully against what had become the area’s leaders, the RKO Bushwick Theatre and Loew’s Gates Theatre. By 1937, it was presenting burlesque shows like “Girls From The Follies” until a police crack-down forced a return to late-run double feature movies. The Century Theatre closed and re-opened several times, and may have undergone another name change to the Symphony Theatre before finally being shuttered forever in the early-1940’s.

This 1975 photo shows the Century Theater towering high above the el station at Gates Ave, and also dwarfed the RKO Bushwick Theater building (which is not an easy task)…..

Here’s a photo of the Century Theater site taken this past week. Compare to the photo I took in the exact same spot above in my October 2004 posting.

I agree….it’s probably better than a vacant lot as it was in my 2004 photo of the location, however, these homes are about as aesthically pleasing as a cement block wall.

This MAY be the theater where Mae West did her pre-Broadway try-out of “Diamond Lil” in 1928. Her autobiography mentions a theater where 3 streets come together.

It would sound much more likely to have been this theater rather than the Monroe. It could also have been the RKO Bushwick perhaps. The Shubert/Century was highly ornate inside too from what it seems, as was the Bushwick. While I don’t know what the inside of the Monroe looked like, it was not on the scale of the RKO or the Century.

I have talked with so many people that used to live in the neighborhood, and they always remember the RKO Bushwick of course, and the Monroe next door to the Century, but rarely do they remember the Century. It’s probably because it closed to movies so early on, but the HUGE building would have been really hard to miss. Does anyone remember if this building just stood empty for all those years, or was it used for some other purpose? Old photos taken from the Gates Ave elevated subway platform show the building still in place as of the mid-70’s.

What a shame they tore down the Century. What a beautiful building. The area where the Gates and Monroe theatres were has undergone a transformation. Gentrification has taken root.

Here’s a stunning photo of the Centurt/Shubert photo in 1940. It appears it was already abandoned by that point. A huge substantial theater with a very short life.

If you enlarge the photo, you can see the corner entrance to the RKO Bushwick directly behind the abandoned Century/Shubert marquee.

The photo of the proscenium seems to be of another theatre, the “Park Theatre” in Fulton Street, Brooklyn (known as “Shubert Theatre” or “Shubert Park Theatre” from 1905 to Dec 1907), according to https://books.google.de/books?id=X8GqBndVPZYC&pg=PA282