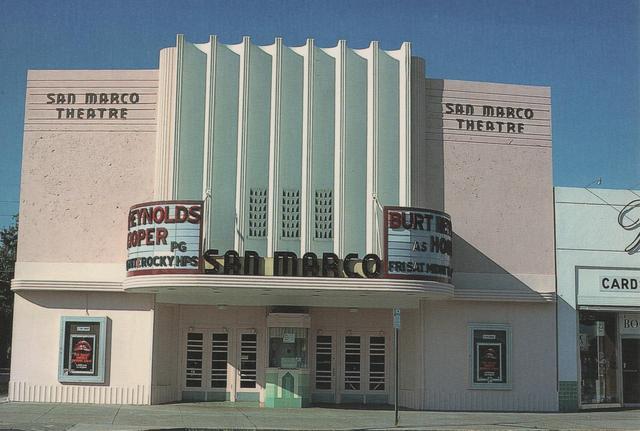 Opened on June 5, 1938 with Edward G. Robinson in “A Slight Case of Murder”. The beautifully maintained San Marco Theatre remains immune to the travails of time and the Art Deco style movie palace is still showing movies after 63 years. On October 25, 1962 it went over to screening arthouse movies. Featured on the back cover of Davis Cone’s book “Popcorn Palaces”, the San Marco Theatre is one of the most elegant and opulent cinemas in the city, designed by architect Roy Benjamin.

The area across the Main St.Bridge was once a vibrant seperate city-South Jacksonville.There were a lot of streets and hundreds of bldgs that are just GONE.Into the 60’s the area was commonly called S.Jax.Now,the San Marco.It will always have the softest of spots in my heart.It was the site of my first “date”,walked with little Janie Jenkins from her parents nearby mansion to the movies.I believe we saw the Strategic Air Command w/Jimmy Stewart.I am so thrilled with the overall condition of the San Marco area.It is almost as nice as it was in 1959.Nearby is the wonderful legit theater with a long history also.

Here are a couple of 2006 photos of the San Marco Theater.

I think that the wonderful survival of the San Marco must have something to do with the theater’s positioning itself, circa 1960, as an ‘art theater’: for a while it called itself the San Marco Art Theater (or probably Theatre). At the time, this meant high culture, not adult material. One day a week (Wednesday, as I recall) the San Marco showed genuinely arty stuff, which was something extraordinary in the cultural desert of Jacksonville. I recall going to see a matinee of the filmed opera “Marriage of Figaro.” I was the only one in the place, not surprisingly, and the box office lady sold me a ticket at an unofficial discount (there were special high prices on the art days).

Before that, in the mid-50s, the San Marco was a typical neighborhood theater. I remember the familiar summer morning cartoon marathons for baby-boomer children.

I must’ve seen 200 movies at the San Marco during my growing-up years. The last one I remember was “Lillies of the Field,” with Sidney Poitier, though there were others because I lived in Jax for another four years after that movie was released.

When I went back to Southside Jacksonville for the last time (the last family funeral) in 2003, it was nice to sit outside the nearly Starbucks and look at the San Marco marquee. The theater is just about my only distinctive memory of the place where I grew up; it was, and happily, still is, something extraordinary in a city that hardly had any identity at all before it snagged an NFL team to give people there something to pretend to talk about.

The San Marco theatre continues to operate independently and, apparantly, thrive. The last time I was in Jacksonville, Pirates of the Caribbean:Dead Man’s Chest was playing…and the first night we went to buy tickets they were sold out. We went the following night and the crowd was equally healthy, though we did manage to get tickets. They have removed every third seat in the theatre and installed tables. They sell pizza, wine, beer, sandwiches, etc. and a lot of people eat before the movie. The place is very well maintained. It’s great to see a vintage theatre like the San Marco not only surviving, but competing head to head with the multi-plexes. I think after Pirates they were showing Talladega nights, so they appear to be first-run consistently. They also program midnight movies and specialty movies on weekends. The surrounding neighborhood has always been nice, but has become very “hot”…lots of building going on, trendy shops, etc. It’s a lovely part of Jacksonville, on the south side across the St. John’s River from downtown…many big, beautiful riverfront homes from the 20’s and 30’s when the area was developed, but also many apartment buildings and duplexes, so the area is lively and quite urban. Well worth a visit by lovers of vintage movie houses.

It is the only “old” movie theatre operating in Jacksonville. 70 years in 2008. As a kid in the late forties and early fifties I used to live there. I remember seeing THE OUTLAW there in the 40’s (re-release I guess). I told my parents I was seeing something else at one of the downtown theatres. We all laughed when they installed Cinemascope because the theatre seemed so small — how can such a small theatre showCINEMASCOPE? I also saw NIAGARA there with Marilyn Monroe and it changed by social life forever. A friend’s mom took us to it saying she heard the scenics of the falls were beautiful.

I am fortunate to live close to this theatre and see films in it periodically. My newfound infatuation with art deco also moves me to learn more about this theatre and other deco buildings in Jacksonville, esp. in the St. Nicholas area(wonderful glass brick signs there!)

Here are two pictures from July 2010.