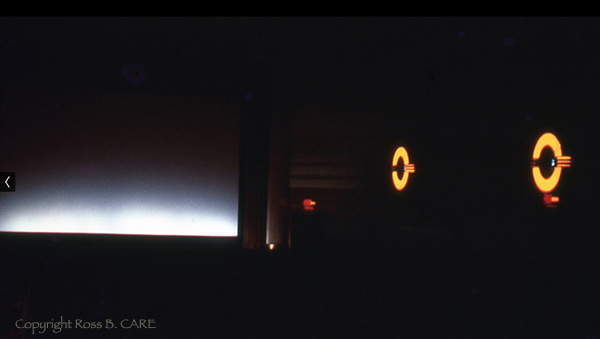 The Main Theatre, originally located at 124 E. Main Street was opened on December 26, 1938 with Shirley Temple in “Just Around the Corner”. It was part of the 9 theatre chain owned and operated by the Stiefel Brothers Roxy Theater Circuit. Used mostly for second run engagements after the films were shown in first run Lancaster, PA city theatres. In 1981 the admission was changed to $1.50 reruns. The theatre was closed on May 17, 1990.

The theatre building was purchased by the local Denver and Ephrata Telephone Company, whose corporate headquarters was located next door. After engineering and architectural studies were completed, it was determined the deterioration of the building was too extensive and was demolished. The last remaining years of operation, there were more sections of the auditorium roped off, due to falling plaster.

Plans were completed for a new “Brossman Business Complex” on the site. These plans included two new theatres. On Nov. 12, 1993, the Main Twin Theatre reopened. One theatre is named the Roxy and has a stage for live presentations. The other is named the Grand and is used exclusively for films. Both theatres show first run films.

The aka is duplicative of the title. Here is some additional information:
http://tinyurl.com/5lpnx4

Lost Memory – The original theatre was demolished. The theatre that was opened in 1938 is gone. I was the one to submit this theatre to Cinema Treasures. I was the one that wrote the above history. And as stated in that the theatre was purchased by the Denver and Ephrata Telephone company. The building was too deteriorated to be saved. The twin theatre operating there now is a new complex incorporated into the new office building that was built on the site of the original theatre. As I wrote above, they salvaged parts of the original theatre. The marquee is in use at the street entrance and the entrance to the parking garage. The box office is used at the inside entrance to the theatre. The original wall lights are used in both theatres.

Those front doors still exist on the new office building and theatre combo. Even the box office is now inside at the theatre entrance.

I loved this theater. It was almost exactly like some of the neighborhood theaters I used to attend when I was a kid in Harrisburg. I lived through the razing of the vintage theaters on the second block of N. Queen St. in Lancaster but it still broke my heart when the Main went.
I do remember that towards the end the roof was leaking and certain sections of seats were roped off lest the ceiling fell on someone!
I remember seeing Disney’s “Song of the South” at the Main, during what was probably its last re-issue prior to its being withdrawn from circulation.

PS: The photos posted by LostMemory are great. Thanks.

The “Theatres Under Construction” column of The Film Daily for December 16, 1938, includes this brief note for the Main Theatre: “Ephrata — Main, 750 seats; Architect: D. Supowitz; Operator: Harry Stiefer; To be completed 12-15-38.”

Please see my new photo of the Main interior with vintage light fixtures.

As I posted on your picture post, those wall lights were saved when the theatre was torn down and were repaired and upgraded and installed in the twin theatres that were included within the new building that replaced the original theatre. As I mentioned in an earlier post even the box office was saved and used for the new theatres. Except it is now located inside rather than at the sidewalk. 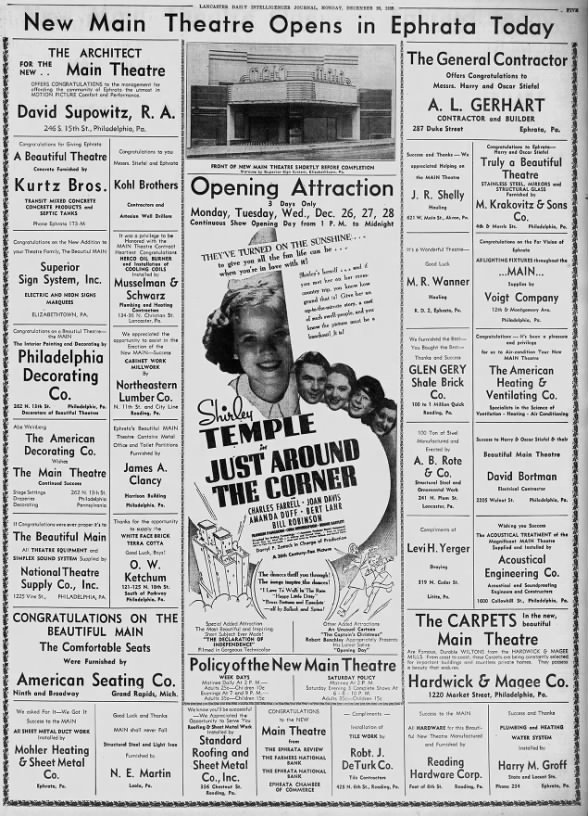