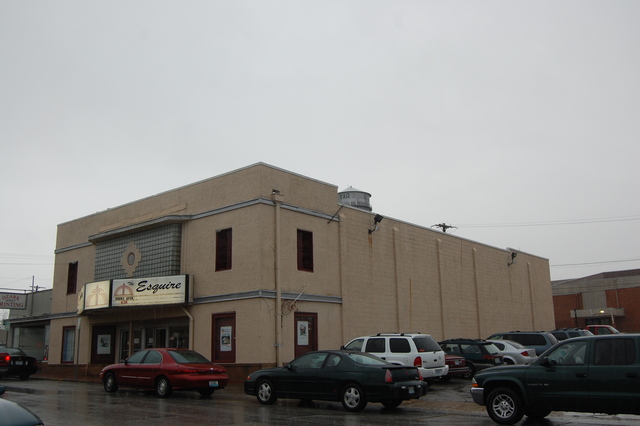 The theatre opened March 11, 1948 as the Drake Theatre, later renamed the New Drake Theatre and then the Esquire Theatre, seating 626. A cream color terra cotta front facade with small marquee. The theatre had a small balcony and lobby with the staircase to the balcony to the left of the concession stand. There were two aisles into the main auditorium on each side of the concession stand.

The theatre was well maintained by B & B and got a small face lift in 1968 and was operated by B & B until they opened their new Cinema 4. The Esquire Theatre closed in 1996. This theatre was originally designed by the Boller Bros.

The Esquire was purchase in the late early 90’s by the First Baptist Church of Bolivar. It hosts youth church several times a week and still has the marquee in the front and the ticket office in the front. I’ve never been inside but am told it is just like it was when it was a movie house. How nice to see an old theater still being used.

The Esquire is now home to “Wednesday Night at the Esquire” an outreach ministry of First Baptist Church Bolivar. With free popcorn and soft drinks, you can listen to Top 40 Country and Christian music from the Esquire Band on the newly expanded stage. Performance drama, reader’s theater and movie clips are often included in the Wednesday program. And, you can often catch a free flick on the big screen or live performances on weekends. The Esquire has undergone a number of renovations over the past nine years, but the original marquee neons still remain as a reminder of her heritage.

This is a photo circa 2007, most likely:
http://tinyurl.com/ydveztz

Original owners Jerry and Edith Drake opened their new Drake Theatre on March 11, 1948, said Boxoffice of March 20. The Drakes had, since 1929, operated the smaller Ritz Theatre in Bolivar, which they planned to continue operating after the new house opened, though on a weekends-only basis. The plans for the Drake Theatre had been prepared by early 1946, and construction might have started that year, but completion of the house appears to have been delayed, probably by post-war shortages of materials.

Boxoffice of December 15, 1945, had an article about the Drakes and their plans for the new theater and for the renovation of the Ritz which would follow the opening of the Drake. Both projects were designed by Robert Boller, but I’ve been unable to find out if the plans for the Ritz were carried out. I don’t find the Ritz mentioned after 1948.

The Drakes were still operating the Drake Theatre at least as late as 1968, when the September 9 issue of Boxoffice reported that they had closed the house for a few days in August while visiting relatives in Colorado.

I’ve been unable to find any references to this house as the Esquire in Boxoffice, or to discover when B&B took over operation.

There is an architectural rendering of the Drake Theatre at lower right on this page of Boxoffice, January 3, 1948. The caption says that the house was to be opened sometime the next month. It also says that the Drake’s older house, the Ritz, would be kept dark once the new theater opened, but would be retained under their ownership. Their original plan had been to remodel the Ritz and keep it open.

The article about the Drakes in the December 15, 1945, issue of Boxoffice now begins at this link and continues here.

Just one of the many that he has posted. Maybe the admin. can remove these