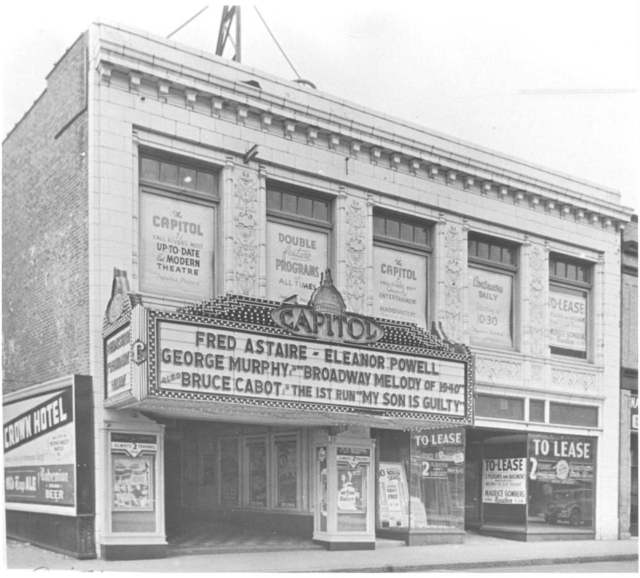 Would it not be nice if at some point a public tour could be offered of the interior? It was done recently with the Orpheum in New Bedford. This might stir up some public support for the restoration of the building, a project that, if I gather correctly, is languishing. A web site devoted to this theatre, with photos, might be nice. Look at the Orpheum, New Bedford site put up by O.R.P.H.

What ever happened to the ideas of refurbishment?

I don’t recall going to the Capital when it was a functioning theater, but I do recall being taken to the bowling ally, as well as the furniture store, after it had closed. During those times my grandmother always took pains to try to show me where the theater was, although it was not open. I was bewildered by this- a theater that was still there, but not? I’d love to see photos of what is , and what was.

Hope/love/Rose,
Pics of the interior and exterior of the Capitol and other FR theatres can be seen on this page:
View link

Portuguese films at the Embassy, Capitol. Item from Boxoffice magazine, October 29, 1955:
“Sponsors of Portuguese presentations have selected the stilled Embassy Theatre to present productions on Sundays of each week for an indefinite period. Portuguese films are offered weekly at the Capitol, which now resumes its seven-day policy.”

“A new marquee at the Capitol Theatre, James McNamara, manager, has been completed. It is the latest in modern artistry. It is V shape of neolite glass with neon lighting and decorations. Concealed lights illuminate the ceiling. The new marquee replaces a rectangular canopy which was damaged several times by high trucks. Recarpeting of the orchestra floor has also been completed. Alterations in the ladies' circular lounge are also in progress.”

Interesting article with photos on effort to salvage this theatre.

Robert Flanagan said the spring semester design project at the College of Architecture and Planning was not about elevations, drawings and models placed on walls and tables before the small gathering.

â€œItâ€\s all about the people and how they work together,â€ he said. â€œWhat weâ€\re trying to do is save a piece of Fall River, and everyone has a role in it.â€

Flanagan compared the Capitol â€" which was shuttered more than a half-century ago â€" to other nearby theater arts revival projects in cities like New Bedford and Woonsocket, R.I. He encouraged owners Donna and Glenn Viveiros to stay with the project.

While the community will help decide whether and how to drive the project forward, students spent thousands of hours recreating what had been, what exists and what could be achieved through their design research and architectural vision.

In their design, they incorporated a square block cultural arts complex around the theater building at Morgan and South Main streets, including a key role for the 150-year-old former N.B. Borden School, an old fire house and adjacent spaces.

It could be an anchor for rebirth by attracting activities from culturally rich Columbia Street and the waterfront, students said in their summary report.

Several of the UColorado students had been to the theater using distance meters, laser measuring devices and other tools to uncover the past and recreate plans that no longer exist. Four months ago, they made a presentation of their work to the owners, Mayor Will Flanagan (no relation), his staff and others interested in the theaterâ€\s revival.

On this day, two of them used video chat to summarize the potential.
Jeffrey Daigle, one of the student project leaders, said revitalizing the theater for live performances and film assumes the rehabilitation project will proceed as funds became available.

The report said many of the 1,500 seats are in poor condition. With code and permit requirements, the total number of seats would likely be reduced to 1,200.

The sound and lighting booth needs to be remodeled to include movie projection. Similarly, rigging, electrical and sound systems need a complete overhaul for the stage. The stage is adequate for musical and dramatic performances, although support spaces do not meet modern standards and need to be wholly reconfigured, the report said.

Student Chris Byerly and another student created a three-dimensional model of the envisioned square block performing arts complex. Their drawings and then-and-now photos showed the dramatic changes since patrons first arrived via street car when the theater opened 84 years ago.

Daigle described how the vacant Borden School, with 20-foot ceilings and old basketball gym, would be conducive for music and dance instruction and theater rehearsals. A parking lot behind the theater could be used as a public park or outdoor performance space, connecting it to the school grounds.

A large costume shop and cafÃ© fronting South Main Street would and bring life with complementary uses, according to floor design plans by Talia Rubin.

â€œTheaters generally donâ€\t make money,â€ Flanagan noted during the program. Itâ€\s the people and other businesses, theaters and cultural arts attractions that revitalize areas and upgrade the economy, he said.

Their conceptual plans included replacing a furniture store next door for arts-related uses, and possibly converting a small plaza across the street for a parking garage.

Ideally, they said, such parking could serve current and future downtown uses.

â€œEverything is related to the performing arts,â€ said Rubin.

â€œIf we donâ€\t respect our past, it will get lost,â€ she said. â€œI think a lot of us took that route to make it a theater arts complex.â€

Others offered support during the hour-long presentation by Flanagan and the two students via video chat.

Darlene Pavao, a teacher with the Resiliency Preparatory School, said her students benefited from what they heard.

â€œTheyâ€\re excited to see thereâ€\s more for the arts. I think they notice that thatâ€\s missing here,â€ said Pavao, who has worked with Donna Viveiros on this project.

She said her students, using the school’s print shop, would create a â€œCapitol Theatre Performing Arts Centerâ€ banner for the building.

Alfred Lima, a retired planner and community activist interested in the cityâ€\s history, offered to show how the graduate studentsâ€\ plans can be integrated with the downtown and waterfront areas.

Peter Daley, a recent University of Massachusetts graduate, has been working to identify grant funding sources.

â€œThis is whatâ€\s going to get this theater up and running,â€ Donna Viveiros said during the presentation. Many times she thanked Flanagan for choosing this project.

â€œOnce the city of Fall River comes in and sees what can be done, it will get a lot more people involved,“ she said. "Theyâ€\ll see the beauty of the theater and what it can do for the city.â€

She and her husband bought the building four years ago for $600,000 and started a nonprofit organization. They’re trying to get the property included in the National Register of Historic Places.

She plans to seek grants, make presentations and hold fundraisers using a creative video of the old theater and the grad studentsâ€\ work. Sheâ€\s hoping others will join in.

Flanagan noted the timing of the endeavor coincides with the stateâ€\s plan to build a SouthCoast train station by 2016. â€œNow Fall River has a chance to catch up. I think the timing is terrific,â€ said Flanagan, who left the city as a graduate student and whose parents and brother remain here.

â€œWe want the project we came up with to be a starting point,â€ Daigle said.
Like other students from his team, he promised to stay involved.

to answer a previous question- the projector (shown in the youtube clip http://www.youtube.com/watch?v=rkgHKr0Jmgk is a Brenkert Enarc BX 60.

Best of luck in the endeaavor to restore this theatre.

“Rentals of Capitol Theatre for the showing of foreign films has been resumed following the summer. ‘Sol e Touros’ and ‘Fogo’ in Portuguese have recently been presented at the house.” -Boxoffice Magazine, September 30, 1950.