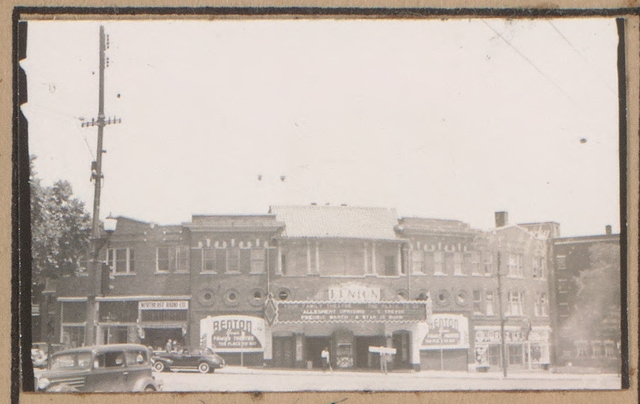 The Benton Theatre opened in 1911 seating 492. Another of the many Kansas City theatres, it was remodelled by the Boller Brothers in 1933.

Located on the corner of Independence Avenue and Benton Boulevard the theatre had a coner entrance with a free standing box office and the entrance doors directly behind. This was a small neighborhood house with a small lobby but nicely decorated with a three aisle auditorium. The auditorium had a lot of decorative plastic work and plush red velvet draped covered the screen.

Here are May 2007 photos of the former Benton Theater, now used as a church facility.

The source of the photos are Eric Bowers of http://www.valdorephoto.com . Please do not duplicate or sell. Photos can be purchased at Web site.

The Benton Theatre, at Independence and Benton Boulevards, was in operation at least as early as 1923. The Pathe Exchange in Kansas City received a letter from the theater’s operator, J. W. Watson, dated January 21, 1923, praising the Pathe serial “The Way of a Man.” The letter was published in the exchange’s advertisement in the February 2, 1924, issue of The Reel Journal.

Can any one tell me when approximately this building started to be associated with being a church? I thought it was 1955 but others think it was in the 1980’s thanks

I don’t know when the Benton Theatre became a church, but it will be a church no longer after today. According to this post at northeastnews.net, the building partly collapsed this morning, and what is left will probably be demolished soon. A vacation bible school was in session at the time of the collapse, but all 44 children and 20 staff members escaped the disaster.

A city official said that the structure was not on the city’s dangerous buildings list, as Kansas City lacks the staff for random building inspections, and only investigates the condition of structures if and when complaints are filed.

Some of the news media reporting on the collapse of the Benton Theatre building earlier today might be checking Cinema Treasures for information, as a couple are using the 1931 opening date we give. It’s wrong, though. An advertisement by the Kansas City Real Estate Board in the August 22, 1926, issue of the Kansas City Star touted real property in the city as an investment, and said:

“[t]he Benton Theater building at Benton and Independence Boulevards was built in 1911 by C. O. Jones. Since then it has paid for itself twice over in rental revenue and was sold this year for three times the original cost.”

David and Noelle’s list of known Boller Brothers theater designs does list the Benton Theatre as a 1931 project for the firm, but that had to have been a remodeling job. The house was mentioned several times in the trade publications during the 1910s and 1920s. I haven’t been able to discover the original architect of the Benton Theatre. Noelle Soren’s research was sufficiently thorough that, had the 1911 Benton been designed by Carl Boller, it’s very likely that she would have discovered the fact.

The news this morning said the building was 113 years old. Sure would like to know when a church took over the building. Thanks

I hope someone can post some pictures of the demolition of the theater. After it closed in the 50’s, it because a 1 Hour Dry Cleaning Facility used in the front of the building and it even retained the Marquee for another 15 years at least. I think it was in 1968 that the marquee was removed and a new sign put up for the dry cleaning business. By this time the auditorium was used for dry cleaning for businesses all over the Metro. I think it went out of business in 1972 and by 1978 it was transformed into a Church. It exclusively became a Spanish Speaking Church about 13 years ago. It really looked nice inside. I wish they could save the front of the building and rebuild the auditorium. Not sure if anyone even wants to do that. It was the last theater building left standing on Independence Ave. I wish someone would post some pics of the National and the Vista when they were operating.

From the quick research I did, the theaters constructed in 1911 include The Benton Theater, The Apollo and the Alamo. Does anyone know if this information points to a specific theater or auditorium in the Kansas City area? I realize this could have come from any building throughout the country or a school auditorium, but thought I would throw it out there to see if anything turns up. Thanks in advance.

Mattr833: There was once an Auditorium Theatre in Kansas City, but it was built long before 1911. It was originally called the Warder Grand Opera House and was at the northeast corner of 9th and Holmes. As far as I know there were no other theaters called the Auditorium in Kansas City.

The cornerstone was probably used as fill when the road it was under was built or improved. Rock fill might have been trucked to the site from anywhere around the region, including any of the small cities and towns on either the Missouri or the Kansas side of the border. The cornerstone might have come from a municipal auditorium in one of them.

After the Benton Theater closed, it because a Dry Cleaning company and Shirt Laundry. For about 15 years the marquee actually remained on the front of the building. I think it was called “One Hour Dry Cleaning ” or something like that. It occupied the Lobby and a part of the auditorium but not a lot. The Seats, and movie equipment had been removed but not much of anything else – you could certainly tell it was a nice theater at one time. I know it was reported that it closed in 1952 but I am pretty sure that it was in the Summer of 1953. Someone once told me that much of the theater equipment was taken to a closed theater on 9th Street in the hope that it would re-open. I do not even know what theater that would have been. I do remember it lit up at night and it was very nice with a lot of Neon and small white lights – very similar to the Uptown Theater – pretty sure the same company designed and build both Marquee’s.