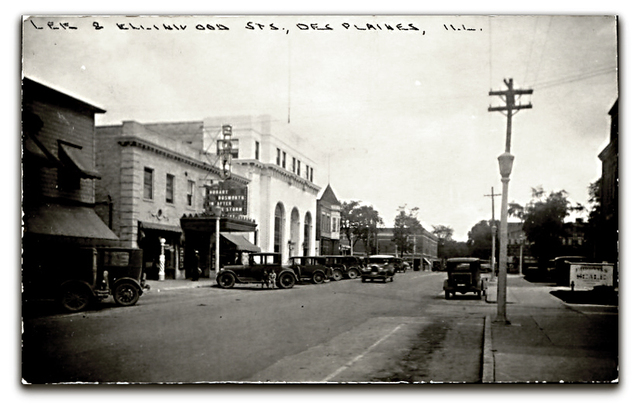 The Echo Theatre, Des Plaines' first movie house, opened around 1910, and was located on Lee Street. It sat just over 650. The Echo was remodeled in the mid-30s, but closed by the mid-40s. Its main competition, the Des Plaines Theatre, which opened in 1926, was located nearby, on Miner Street, and was larger and more ornate than the old-fashioned Echo.

After closing as a movie house, the auditorium was later razed and replaced with offices, while the lobby and stagehouse portions of the former theater still remain. The former lobby is today used as a meeting space for an investment company. A new downtown Des Plaines branch of the post office has recently opened in one of the former storefronts flanking the old theater lobby. The former stagehouse was demolished in fall of 2019, for apartments to be built on the site. Only the facade remains now.

Interestingly enough, the building behind the former Echo Theatre (Which was located next to the First Bank Building in Downtown Des Plaines) appears to be the former stage/fly space. It is a tall, narrow building, and a roofline similar to a theatre’s house is evident. There is currently not much in either building, but the former theatre was attached via a bridge to the bank building in the mid-90s.

Address was 680 Lee. The former lobby is still intact. Also interesting to note that the current facade is not the original lobby; when built around 1915 it had a plainer, single story storefront. I believe the street was widened in the 1920s necessitating a new lobby, or it may have merely been a matter of modernization. The house was very long and narrow.

The lobby is actually intact in the center storefront. And the building to the rear is the former stage.

Architect for the renovated/rebuilt Echo, 1925, was Elmer Behrens. A December 5, 1925 article from the Chicago Tribune describes it as a 750 seat playhouse with a black and silver interior, with ‘several novel electric lighting features". This major renovation, claiming to only use one wall from the old theatre, was no doubt in response to the competition from the Des Plaines Theatre, opened only two months prior to this article. The article also says the Echo would open in late January, only two months from the article’s publishing. The original theatre was built around 1913, in fact, and was looking like the older nickelodeon it was. A retrospective article from the 1980s describes the interior as including a seated allegorical figure on a ceiling mural. The lobby remains intact, for now, although the auditorium was removed in the 1960s. The stage house also still stands, used as architect’s offices for some time. The building is currently under renovation for use as a post office branch. The facade looks nearly the same as it did when it opened, except for modernized storefronts from a 1980s renovation and the removal of 4 lanterns which were atop the roof.

My god, the post office is actually opening? It was supposed to open at the beginning of the year. The Post Office does not occupy any of the former theater space; it is in one of the former shops flanking the lobby back into office space that was constructed long ago where the auditorium once stood, with a few parking spots in the rest of the space. The stagehouse is also still there, although I don’t believe it’s occupied presently. The former lobby is still in pretty good shape except that the terrazzo is covered by carpet, and is used as a meeting room for a branch of Athena Investments, which opened early this year. Previously the rear office space had been connected to the former lobby, but this was shifted for the Post Office.

Motion Picture News, December 19, 1925: “Construction contracts on a new theater at Des Plaines, Ill., have been awarded to Otto, John, & Butler, 818 Lee (Street), Des Plaines. The house is owned by W.C. Brahan Magee, 549 Lee, and will be two story, 42 by 160 feet. It will cost $60,000. There will be stores and offices in the building.” This really referred to the new lobby and remodeling of the house, to better compete with the Des Plaines Theatre. The theater reopened and closed several times over the years.

A redevelopment project next year will remove the stage house, but otherwise wrap around this building and the bank next door, unless plans change.

The former stagehouse of the Echo is being demolished and replaced by a mixed residential/retail development, leaving the former lobby of the Echo the only portion of the theater remaining after the auditorium was torn down in the early 60s.