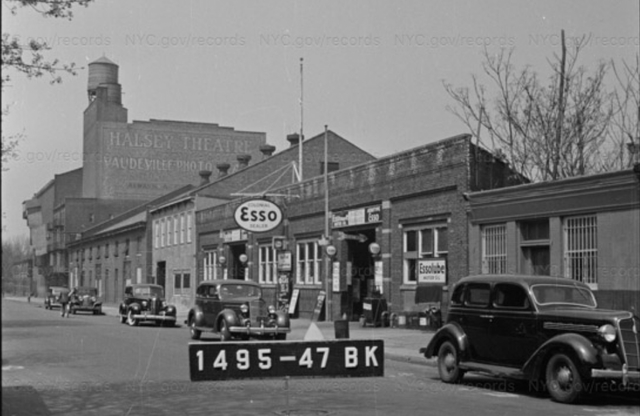 This 2,100-seat theatre, which originally presented both vaudeville and silent movies, was located on Halsey Street between Saratoga Avenue and Broadway in Brooklyn’s Bedford Stuyvesant section. It was built 1912, opening on November 25, 1912 presenting vaudeville, it was managed by William Fox.

It is most notable for being the place where the legendary Jackie Gleason won an amateur contest and got his first job, as an emcee, at the young age of 15, in 1931.

The theatre was closed in 1943 and went over to manufacturing use. It was demolished around 1967.

After posting the last comment, I perused the Halsey’s page in the Brooklyn Theatre Index. A few interesting facts emerged.

Most significantly, the Index provides a 1943 closing date, which conflicts with the 1945 date cited in the previous comments. The Index’s documentation – a 1945 NY Times article that, in the course of describing the property’s sale, notes that the Halsey had been dark for about two years – seems pretty strong, though not absolutely conclusive.

Another 1945 article, this time from the Brooklyn Eagle, notes the possibility of the old theater being converted into a boxing venue. While it is unclear if this ever came to pass, it does provide some documentation for several previous comments. There was probably much comment in the community that the place COULD become a boxing site that may have lingered in people’s memories whether or not the move was ever made.

The last property transaction cited occurred in 1953, when it was probably converted into a factory. It is interesting to note that, between the 1945 and 1953 sales, the assessed valuation of the property had plunged from $100,000 to $50,000. My guess is that the intervening decline in the community’s fortunes during that time was not the only reason for this development.

Getting back to Jackie Gleason, it is clear that the Halsey provided many fond memories to him. Although it closed sometime in the mid-1940’s, it remained Ralph Kramdan’s movie house of choice well into the following decade. Long live the Halsey!

Two interior photos of the Halsey Theatre appear on page 39 of the January, 1913, issue of the trade journal Architecture and Building.

1) This theater does not appear on the “Movie Theaters in Bushwick Brooklyn, NY” neighborhood map. (Probably because it’s listed as “Bedford-Stuyvesant”, but technically, the border is Broadway, and you list theaters on the southeast side of Broadway as “Bushwick”. . 1.5) Yes, I know it would look crowded, but how about a one-stop map for all the theaters? So we can just zoom in to a region, and not have to worry about neighborhood listings, or only seeing 30 listings and map placements at a time.

didn’t William Fox at one time manage this theater?

This web page from Brownstone Detectives says that the Halsey Theatre was built in 1912. The adjacent Arcadia Dance Hall and Broadway Arena flanking the theater were built around the same time by the same developer. The page notes that the Halsey closed in 1943 and was occupied through the late 1940s by a company that made cardboard leis and party favors. The arena next door was the boxing venue. All three structures were demolished around 1967 to make way for a New York City Housing Authority senior citizens housing project.

The caption of one of the photos in the January, 1913, issue of the trade journal Architecture and Building to which I linked in an earlier comment says that the Halsey Theatre was designed by the architectural firm Harde & Short. However, a biographical sketch of the firm says that the partnership was dissolved in 1909 (confirmed by this article in The New York Times from December 1, 2005), so unless the theater was designed some two to three years before it opened it was more likely one or the other of them who completed the project. I suppose it’s possible that the design was done late in 1909 and construction began in 1911, but I haven’t found the opening date of the theater, nor the exact date on which the partnership of Harde & Short was dissolved.

Herbert Spencer Steinhardt (later shortened to Harde) and Richard Thomas Short are remembered for a number of lavishly decorated apartment buildings completed between 1904 and 1909. Short went on to design a large number of theaters, mostly in Brooklyn, under the professional name R. Thomas Short.

the intro at top should point out this was if I’m not mistaken the first theater managed by Willian Fox.

bigjoe59, I believe William Fox bought his first “theatre” in 1904, a 146 seat nickelodeon in Brooklyn. By time the Halsey was built in 1912, he operated quite a few theatres.<

to walterk thanks for your reply. The Man Who Made The Movies a bio of Fox by Vanda Krefft is one of my favorite movie history books ever. I could swear she said the Halsey was the 1st theater Fox managed with the Dewey the 1st he managed in Manhattan.

also I’m surprised the Halsey close as early as 1943. most neighborhood theaters in the Bronx took yearsssss to be done in by t.v.. so I find it interesting the Halsey closed up a good 5/6 years before t.v. even came about.