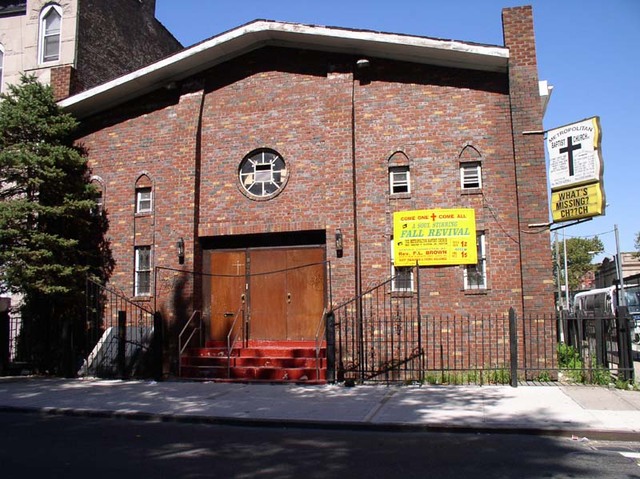 This was a small neighborhood theatre located on Halsey Street between Saratoga Avenue and Howard Avenue. Originally built as a church, it was opened as the Imperial Theatre on November 8, 1909. It was closed in 1940.

In 1945, the façade was rebuilt and it converted back to church use.

I wonder if it closed before the early 1970 release of “The Exorcist”. The irony of playing that in a theater that is to become a church.

Thanks, Bway. According to my aunt, this was the original Brooklyn location of St. John’s University.

What is the address of this St. John the Baptist RC Church ?

I’ve been in the church and rectory of St. Jean Baptiste RC Church at 74th and Lexington on the Upper East Side of Manhattan. That was late 1980 and early 1981. My best friend was studying for the priesthood at the time and had stayed there.

It would be interesting to research the history of Our Lady Of Lourdes R.C. Church, which once stood on Aberdeen St. between Bway and Bushwick Avenue. It was demolished between 1972 and 1976.

You might recall the uproar in the late 1980’s over the conversion of a Greenwich Village church into a night club, and the scene showing that in L.A. in the 1992 film “Basic Instinct”.

Peter, they are at 75 Lewis Ave in Bedford-Stuyvesant. In their website they have a History Section that gives an all to brief history of them, and I can;t find any more information. In another section, they give a photo of the interior, which obviously is a “lower” church, or the main church with a “fake” drop ceiling.

Yes, I love those type of conversions, like the one in “Basic Instinct”. I remember the conversion in Greenwich village too. Is is still a nightclub, and do you know it’s name?

You know the whole thing by heart, lostmemory ?

Bway, the Imperial must have closed well before “The Exorcist” opened in NYC the day after Christmas 1973.

I am both awed and horrified at the thought of how “Exorcist” would have looked and sounded at Loew’s Valencia in Jamaica. I have read on this site that it played in a similar theater, the now-closed State Lake in Chicago’s Loop.

Actually, some have said that “Exorcist” was a commercial of sorts for the Catholic Church, implying that its rituals were powerful enough to cast out demons. Then again, both priests died in the process, the younger, first possessed, then a suicide, then absolved before he died …

Thanks, Bway. No, I don’t know the name of that church that became a nightclub. However, I have heard of a nightclub in Manhattan called “The Library”, which looked like one, and know of a “Seminary Coffee Shop” at Lincoln, Halsted and Fullerton, in Chicago, near several blues clubs.

Yes I would also like to find out more about Our Lady Of Lourdes Church on Aberdeen St. I went to there school and I was a graduate of the class of 1969.
posted by alicia Nov 8th 2004

Judging by the building, it was never that large of a theater to begin with.

Here’s an aerial view of the old Imperial Theater, which now has been altered into a church. It’s right across from Saratoga Park.

What year did this Imperial stop showing movies?