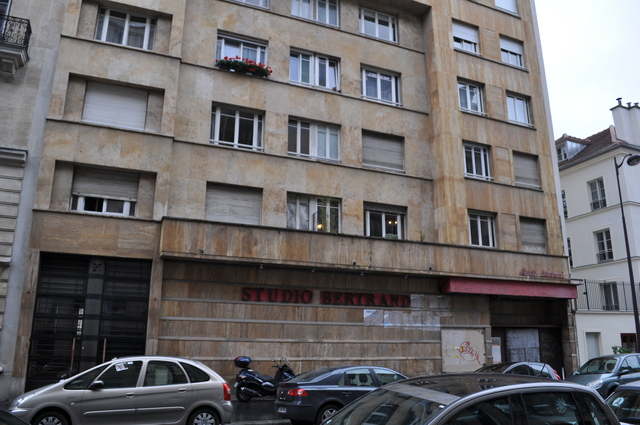 Built as an art house cinema which opened in 1934, it has an Art Deco façade. In the 1950’s it was member of the AFCAE, the association for ‘cinema d'art et d'essai’. This cinema was owned during the 1960’s by the manager of the live Theatre Gramont, and had the same policy of two movies for each performance for a long time: subtitled original versions of many old American movies.

The screen was very small because the projection booth was at the level of the ceiling and in a corner of the deep balcony and could not afford a bigger size especially with CinemaScope.

From 1980 until 1983, a new management tried to give new life to the cinema introducing live music with rock concerts and a stage was built. It was managed by Hector who was a former rock-musician from the 1960’s. It then returned to movies with five different movies every day.

A new projection booth was built in the middle of the balcony in order to use a new wide screen, but after one year, the Studio Bertrand closed in 1986.

The theatre has been dark for more than 30 years.

It is a shame that this elegant theatre (cinéma) remains close for some 30 years! I should like to know who is the owner of this cinema. In Paris and in the 7th arrondissement we need cultural places and cinemas. Maybe the Mairie de Paris could buy it. Thank you in advance for any reply concerning this matter. Love from Paris.