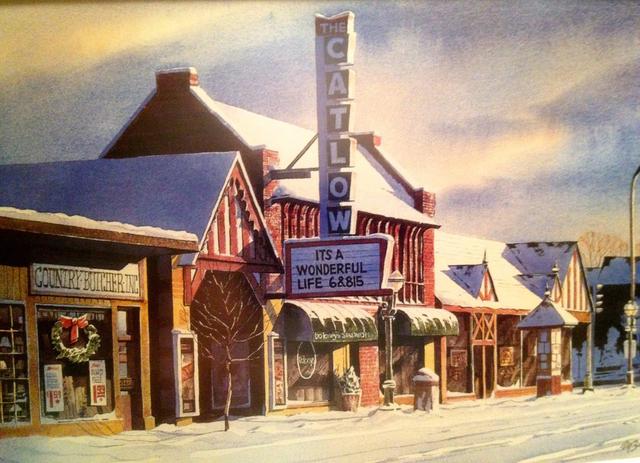 Named for its original owner, a local businessman named Wright Catlow, this Tudor Revival/Jacobean-inspired theater opened on May 28th, 1927. It was designed by the Chicago architectural firm of Betts & Holcomb.

The main historical feature of the Catlow Theater is the interior design by renowned sculptor & designer, Alfonso Iannelli, who collaborated with such famous architects as Frank Lloyd Wright, Barry Byrne, Purcell & Emlslie, and Bruce Goff. (More historical information on Iannelli available at the Catlow website.)

The Catlow Theater featured movies and live acts on its stage from 1927 to 1933. Some of the famous artists appearing there include Gene Autry, Sally Rand - the fan dancer, and Red Norvo. The theater changed over to a movies-only format by 1934.

The Catlow Theater was the first theater in Illinois to have a website (1995) and one of only a handful in the country to have one at the time.

The Catlow Theater was still in operation and still showing movies. Its mid-run features are just $4 a seat. It was “Closed until Further Notice” in December 2019. It was reopened on January 10, 2020 with Emma Watson in “Little Women”.

The owners are currently in negotiations with the Village of Barrington to purchase the theater for use as a Community/Performing Arts Center.

Wow, I had no idea this place existed.
Thanks to CT & everyone whose posted pictures.

Here is a December 1968 ad from the Daily Herald:
http://tinyurl.com/oawryq

Here is another photo:
http://tinyurl.com/y63kp3t

“They should renovate this place its sort of a dump”

Ouch!
Yeah, we would love to, but with what money? We’re doing the best we can considering the times. There’s a lot more competition (with all the latest equipment) out there these days. Being an old-time single screen theater isn’t easy, but we’re still plugging along on our own. And most of our loyal patrons seem to enjoy coming here.
-Tim

The Catlow Theater is threatened with extinction with Hollywood’s move to digital films. The cost of new equipment to show digital films runs around $100K. No problem for the huge multiplex chain theaters-but for a small single-screen cinema like The Catlow, this can easily put our beloved cinema out of business.

Tim and his fiance, Roberta, have launched a fundraising campaign to get the money for the new equipment and keep The Catlow alive and kicking. Go to the website below to contribute. In just one day 179 supporters have already pledged more than $16K for the new equipment. Barrington residents, those of us who grew up in Barrington, and cinema lovers from around the world are rising up to save this icon from extinction.

PS to Tim: You and Roberta are doing a FANTASTIC job! Thank you!

A brief article about the Catlow Theatre appears on this page of Exhibitors Herald and Moving Picture World of April 14, 1928. Two photos of the auditorium can be seen on this page.

Closed until further notice.
Article below that references website and fundraiser that began in October.

The Catlow Theatre closed because owner Tim O'Connor didn’t have the cash to pay bills. He sent an email over the weekend to say “Unless we meet our crowd fundraiser goal, we may not be able to book any movies until we come up with enough money to pay more bills.” The Catlow was to open for special events such as scheduled screenings of Oscar-nominated short films on Feb. 8 and Feb. 9. (Tickets for those are available through the village government: www.barrington-il.gov/oscars ) The Catlow nearly closed over unpaid taxes last October but struggled through. Still, Catlow Theater LP filed for Chapter 7 bankruptcy in U.S. District Court in Chicago that month with the majority of its creditors listed being film studios. O'Connor says the Catlow is in disrepair and cited a lack of interest in its offerings there. In 2012, supporters raised $175,395 online to buy a digital projector. Crowdfunding paid for some repairs to the heating system and marquee. The latest online fundraising drive seeks $30,000. As of last week, almost $15,000 had been raised.

The Catlow Theatre reopens Friday, January 10 though efforts continue to seek financial assistance to keep afloat. “Little Women” will be screened at at 5:10 and 8 p.m. Friday and Saturday, and 7 p.m. Sunday through Thursday. “Future movies here will be a week-to-week thing until we get back on our feet, so, of course, we will need heavy, heavy, heavy support during this feature’s run to keep things moving along at the Catlow,” said manager Tim O'Connor to patrons today, adding “We still need your help to get us to the next level — a live stage venue,”