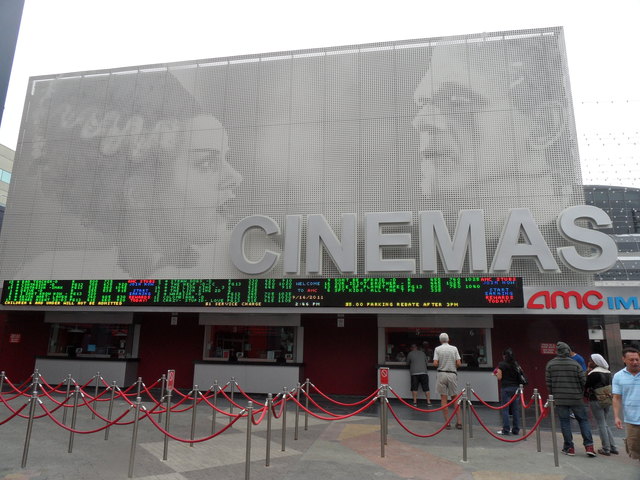 Opened July 1, 1987 by Cineplex Odeon, the Universal City Cinemas contain 18 “regular” motion picture auditoria and one IMAX screen, with a total seating capacity of 5,485. The theatre is situated inside Universal’s popular City Walk entertainment and retail complex at Universal Studios.

From May 4, 2007 after AMC had merged with Loews, all screens were equipped with stadium seating. In 2016 AMC installed their signature Recliners in all auditoriums with a reduced seating capacity of 3,004. In December 2016 it was renamed Universal Cinema. The seating capacity has been further reduced to

I’ve been to this theater both when it was still AMC Universal Citywalk and when it was renamed Universal Cinema. Back when it still had it’s old name, I went to this theater on a trip to California 2 years ago, and saw ‘'Ant-Man’‘(in IMAX 3D) and ’‘Mission: Impossible-Rogue Nation’‘(I really liked both films, but I thought that ’‘Mission: Impossible-Rogue Nation’‘ was a bit better than ’‘Ant-Man’‘, but I think both of them are really good films) in their IMAX theater. Their screen was large and huge and had amazing sound, but that was nothing to the huge renovation it got. When I next went to this theater this summer(when it was renamed Universal Cinema), it really had a massive renovation. Recliners, some auditoriums featuring Dolby Atmos sound, and a huge overhaul to their IMAX theater, now with the IMAX Laser system. I saw ’‘Spider-Man: Homecoming’‘(in IMAX 3D) in their new IMAX theater, and wow. What an awesome experience it was. Not only was the movie awesome(it’s one of my favorite films of 2017 so far), the screen was still massive, but the image quality and sound got a major overhaul. The image quality looked a lot better than the old IMAX theater, and the sound. Wow. EXTREMELY LOUD, BUT VERY SATISFYING. If I went back to California, I would definitely go to this theater again. It’s awesome and very worth it.

I just saw Justice League, I notice they seem to be shown in ratio 1.89:1.

I followed the news about Justice League because it has a 70mm release and people who saw it in that format regretted that it was in 1.85 aspect ratio instead of the full-frame 2.20 ratio of standard 70mm. So I guess you saw it in the intended aspect ratio but IMDB wasn’t accurate on this one. It rarely happens but it does in a few cases unfortunately.

Please add to description, after AMC and Loews merge, all screens had stadium seating May 4, 2007 and in 2016, AMC installed their signature Recliners in all auditorium.