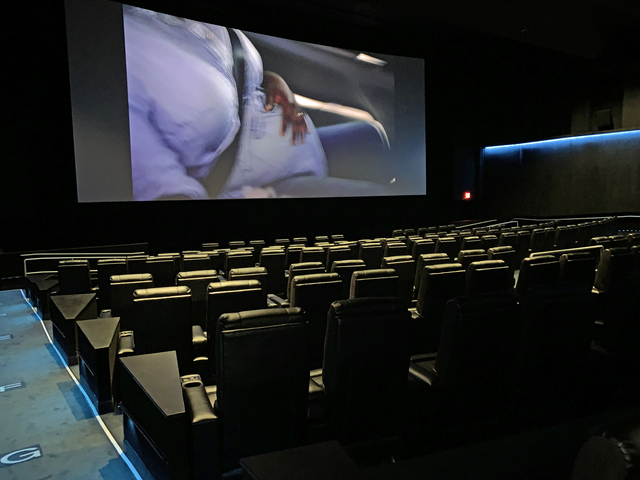 On November 18, 1994, on the site of a demolished post office, the circuit then known by the Sony Theatres moniker introduced what immediately became the nation’s busiest multiplex at Broadway and W. 68th Street.

Construction of the Millennium Partners development known as Lincoln Square began on Manhattan’s Upper West Side in 1992. The $250 million mixed-use project, covering the block from Broadway to Columbus Avenue between W. 67th Street and W. 68th Street, was to rise 545 feet and encompass 800,000-square-feet. The developers took the unusual path of selling and leasing much of the complex’s space before construction had begun. Among the tenants of the 8-story commercial base, to be topped by a 38-story apartment tower, was Loews Theater Management Corporation. Plans for a nine-screen movie theatre with a traditional external box office and no inner lobby or unusual interiors were first conceived by Sony Pictures Entertainment Executive VP Lawrence Ruisi and Chairman Peter Guber. When Jim and Barrie Lawson-Loeks joined Loews/Sony Theatres as co-chairs in 1992, they envisioned a different complex, one that would include a mural-adorned lobby, movie palace ornamentation, indoor ticket selling stations, and more.

Sony Theatres Lincoln Square was designed by the firm of Gensler and Associates. The theatre’s lighting scheme was executed by Gallegos Lighting and the building’s 75' tall by 130' wide lobby mural was produced by EverGreene Painting Studios. (If ever gazing upon the mural, look, among the images from “Lawrence of Arabia”, “It Happened One Night”, and other classic films of Sony [Columbia] Pictures' past, for the embedded names of Sony/Loews executives of the era).

Upon its opening, the theatre totaled 3,046 seats and featured nine traditional exhibition auditoriums, each with a name and plaster/molded-fiberglass entrance paying homage to a grand movie palace of Loews' past. Among these were the Valencia, Kings, State, Capital, Paradise, and Jersey. The entry portals were designed as stylized representations of the old-time movie palaces. (The Paradise, for instance, has an Egyptian theme.) The grandest of the nine theatres bore the name “Loew’s”, since the circuit’s previous designation was, at the time, retired.

This premiere auditorium was modeled after the Thomas Lamb-designed Loew’s 72nd Street theatre (demolished in 1961) and reinterpreted that venue’s Thai-temple inspiration. The theatre featured a red and gold color scheme, hand-carved designs atop gilded columns, a chandelier, a proscenium arch featuring elephants and palm trees, a gold show curtain, and a balcony. A two-minutes-long lighting pre-show was created by Patrick Gallegos, using equipment mounted on the balcony rail and footlights, to accompany a commissioned score by Jonathan Brielle. The auditorium housed 876 seats, a 65 feet wide by 26 feet tall screen, was 70mm capable, THX-certified, and opened with state of the art audio. Later, it featured Dolby Digital, SDDS 8-channel, and DTS.

Perhaps the facility’s most attention-grabbing feature was the Sony IMAX Theatre. Billed in advertisements of the time as “The 8-Story Wonder of the World”, the theatre featured 600 seats (not included in the nine-screen total cited above), the United States' largest theatrical screen measuring 100' by 80', and was reached by means of what was claimed to be the world’s largest free-standing escalator. It was the first IMAX theatre in the U.S. to be operated by a major exhibition circuit and also the first to exhibit 3-D films in the large screen format. The debut IMAX features were “The Last Buffalo”, which had previously been exhibited, and the premiere engagement of “Into the Deep”. On April 21, 1995, the theatre presented the first fictional IMAX film, “Wings of Courage”, starring Val Kilmer and Elizabeth McGovern and directed by Jean-Jacques Annaud. The film was the earliest to make use of the new IMAX 3-D Personal Sound Environment System. On October 20 of that year, “Across the Sea of Time” was presented, along with the ability for the audience to listen to the film in the language of their choosing via the four audio tracks available in their headsets. The IMAX theatre features a system by which, in a process lasting fewer than 40 minutes, each of the audience headsets is run through a fine mist of water and lens cleaning fluid between shows. Security panels sound alarms should a headset be mistakenly removed from the auditorium. In addition, the auditorium’s porthole glass is intentionally oversized, in order to allow the interested to peer into the projection booth, home to 7.5' wide film platters.

All of the building’s auditoriums, including 3 basement theatres added on March 3, 1995 and originally intended to exhibit art house fare (a plan that was never executed), are reached via a ticket lobby featuring numerous automated ticketing kiosks and a Deco-inspired, 8-station box office at the end of a terrazzo floor with embedded brass stars (intended to be engraved with the names of stars visiting the theatre for premieres of their films). Patrons visiting one of the original 9 auditoriums enter an enormous concession lobby through an entryway replicating the gates of Sony Pictures Entertainment’s Culver City studio lot. Floor-to-ceiling structural columns are disguised as palm trees and large screens display trailers for upcoming attractions. A frieze features the names of Hollywood stars and encircles the space. The below-street-level auditoriums, which brought the facility’s total seat count to 4,144 (including IMAX), share a lobby showcasing a black-and-white mural paying homage to 1930’s Hollywood and an auxiliary concession stand. One of these auditoriums was originally equipped with joysticks for the age of interactive movies intended to be ushered in by 1995’s “Mr. Payback”. (The basement space was originally reserved for a neighboring tenant, Barnes & Noble.)

During its opening weekend in 1994, the Lincoln Square drew 33,000 paying customers and grossed more than $202,000 at the box office. The opening features were “Star Trek Generations” (generating $100,000), “The Professional” ($46,000), “Miracle on 34th Street” (1994), “The Lion King” (in the first weekend of a holiday-season re-release), and “The Swan Princess”. In the years since, Sony/Loews/Loews Cineplex Entertainment has striven to maintain the theatre’s technological pre-eminence. The premiere Loews auditorium is THX-certified. AMC now operates the theatre, having purchased the Loews Cineplex theatres. The seating capacity in 2018 was reduced to 3,254. In November 2019 the former Loew’s screen was renamed Dolby Cinema at AMC and the seating capacity was reduced from 876-seats down to 291-seats, giving a total seating capacity of 2,669.

zoetmb… Where do you count these seats???

is no time to die being shown in 70mm this weekend?

moviebuff82: You asked if NTTD is being shown in 70mm.
Since you saw it.. is it???
The AMC LC site mentions only 40 minutes of it were
shot with IMAX cameras. Who knows now-a-days!!
Was the image wide-screen letter-boxed on this giant screen?

Hello. I would like to know the seats distribution across all auditoria at the opening. The big one had 876, how many did the others have? I don’t think it is mentioned in the comments but there are already 68 pages and I’ve only read the few latest and the few earliest. Thanks.

will Avatar in 3D be in the IMAX auditorium the whole 2 weeks?