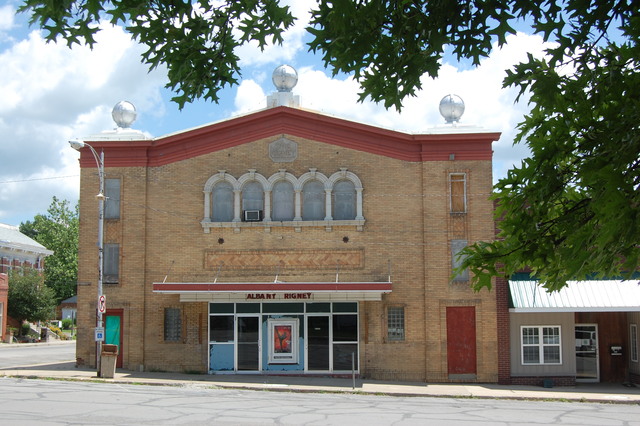 In 1966 it became the Wilcox Theatre, but later went back to its original name. Open weekends only showing first run features. Seating is 396. The population of Albany is a little under 2,000 so I assume that weekends only serves the community.

The Rigney Theatre was closed March 30, 2013 with “The Croods”. It did not make the transition to digital projection.

The Rigney web site is: http://www.albanymo.net/rigneytheater/

The Rigney Theatre closed in June of 2013 for reapirs and has never reopened.

Judge Thomas N. Rigney of Albany selected architect Carl Boller of Kansas City to build a 900-seat theatre capable of staging live events and motion pictures. It launched December 30, 1914 with a live stage play but would also have motion pictures within months of its launch.

In 1931, the orchestra pit was torn out with the full conversion to full time talking pictures. On December 6, 1956, the Rigney converted to widescreen equipment to show CinemaScope titles. In 1966, the venue was sold and became the Wilcox Theatre. It would later get its original name back before closing.

1916 Sanborn shows a capacity of 666, and notes that it offers ‘moving pictures & vaudeville’. The stone that bears the name also has a small note ‘Reed & Hutch’ with ‘W.H.H.’ below that. I assume Reed & Hutch were the builders or perhaps owners, and “W.H.H.‘ is either some acronym I can’t decipher, or the initials of the stonemason.