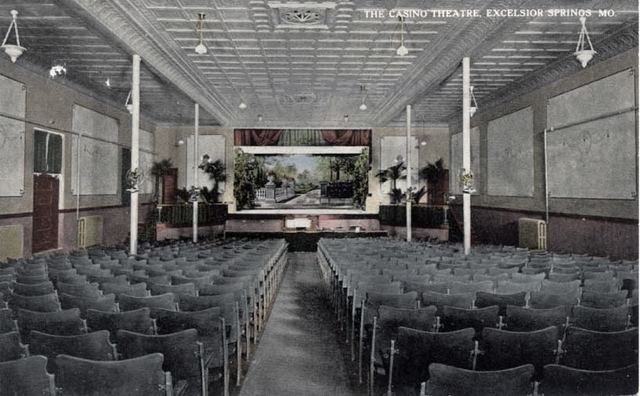 One of three theatres that once served Excelsior Springs. They are all closed now.

The Siloam Theatre was operating by 1950, and was a single floor theatre located in the center of town seating 426. The two older theatres, the Wood Theatre and the Beyer Theatre closed first, and the Siloam Theatre just a few years later.

A 1916 ad for the Casino Theatre on this web page gives its location as “One Half Block North of Siloam.” As near as I can figure, Siloam refers to Siloam Spring. A facility called the Hall of Waters was built at Siloam Spring in the 1930s, and today houses city offices, a visitors center, and a museum. It is on the south side of Broadway opposite the end of Elizabeth Street. This makes me think that perhaps the Siloam Theatre was the Casino Theatre, renamed.

Odd numbers are on the east sides of north-south streets in Excelsior Springs, so the Siloam Theatre would have been on the right side of Elizabeth Street as you go north from Broadway.

The Casino is on the 1913 Sanborn, exactly where Joe suggests. The theater is a large one story brick building that goes back more than half a block. There was just a narrow alley between it and the furniture store behind it (which is still there). The entire northern edge is a 2 story section of shops, which I believe was a separate building. It was an empty lot in 2008, and now there appears to be Section 8 housing there.