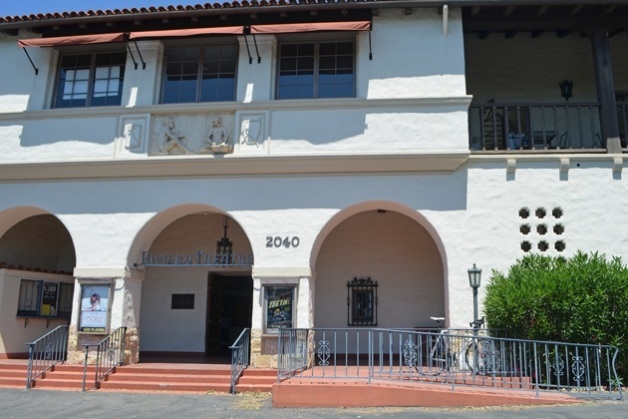 Opened in 1965 and listed at 2020 Alameda Padre Serra until 1971, this was previously part of the old UCSB campus. Now it shows first-run art / foreign films, situated in the hills of Santa Barbara. It seems to have some kind of balcony but it’s blocked off by furniture.

About a decade ago I took my Mom to the Riviera, where we saw a French film called, “Tale of Springtime.” The significance of visiting the location was that my Mom was a student at the old UCSB campus in the late 1930s. It was a very nostalgic visit for her.

The interior of the Riviera does indeed look like a typical Mission style school auditorium such as were built all around California from the Teens through the Thirties. It makes a fine small movie theatre with a classic feel. There is a gabled beamed ceiling and a simple niche in the wall high above the proscenium. Along the sidewalls are lantern-style wall sconces with amber glass stenciled with a Spanish-style letter “R.”

As this theater is located in the auditorium of the former Riviera campus of Santa Barbara College of the University of California, the architect of the building can be identified as Alfred Eichler. The auditorium building was designed in 1926.

Eichler, who had briefly practiced architecture in Los Angeles after attending the Beaux Arts Institute of Design, joined the Division of Architecture of California’s Department of Public Works in 1925, the same year the college (then Santa Barbara State Teachers College) was devastated by a major earthquake. Eichler became the principal architect for the rebuilding the college, and designed most of the early buildings at both the Riviera Campus and the Mesa Campus (now the location of Santa Barbara City College.)

Eichler designed hundreds of projects for the State of California before retiring in 1963. As he never returned to private practice, it’s likely that the Riviera is the only building he designed which is now a movie theater, though he probably designed many auditoriums for various state facilities.

Metropolitan Theaters no longer owns it. It appears that the Santa Barbara International Film Festival currently is operating the theater.