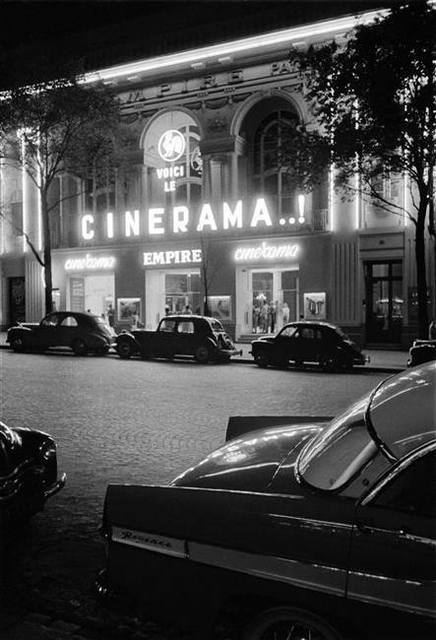 There has been a place of entertainment for a long time (since the 19th century) at this location near the Arc de Triomphe. Just between the 1930’s and 1970’s, three legitimate theatres, two movie theatres, and a ballroom have been located there.

The Empire started as a “concert café”. During the 1920’s, a 1,300 seat, two balcony theatre was built. It was a major showplace of Paris where many French and foreign entertainers performed.

The Empire changed owners many times through the years, among them the Brothers Amar, a circus family that installed sophisticated machinery which could convert the stage for circus shows.

The Pathe chain was running the theatre in the 1950’s but could not make profit enough.

The auditorium was shaped like the London Palladium with a deep second balcony. On 17th May 1955, the Empire after a refurbishing had Cinerama installed. The stage was razed and three projection booths were built in the rear side of the first balcony. A new wide screen hidden by a huge red curtain with screen taps was also added. At the beginning of “This Is Cinerama” after the short introduction, the curtain vanished and the giant picture with stereo sound was an unforgettable moment.

But the old theatre was not convenient because of bad seats on each side of the balconies yet Cinerama was so successful that after a run of “Search For Paradise”, the Empire closed on 1st November 1960. The theatre was rebuilt specifically for Cinerama. It reopened 5th February 1962 with “Windjammer”.

The auditorium was now at the first level reached by escalators to the huge lobby with a bar and “Champaign bar”. Decorated in brown colours, the curtain opened on the curved screen from wall to wall and from ground floor to the ceiling. Even the ushers uniforms were brown.

“How the West Was Won” ran for months. After the last Cinerama movie was shown, the Empire presented 70mm prints on a less curved screen. The projection booth was located under the balcony.

“2001: A Space Odyssey”, “Playtime”, “The Bible”, “Krakatoa East of Java”, “Grand Prix”, and “Khartoum” were among hits at the Empire. On 22nd May 1971 Cinerama returned to the building screening “How the West Was Won”. This was followed by “The Wonderful World of the Brothers Grimm”, and the final film to be screened was “This is Cinerama” on 1st August 1972.

Around 1975, it became difficult to find a suitable policy for the Empire and it was decided to use the theatre as a TV studio.

The theatre was renovated adding a new stage for TV shows, new design and a live Sunday afternoon program was broadcast for more than twenty years. Projection facilities were kept.

In 2004, the Empire was still used as a studio, but a threat to the building due to the cost of the district next to the Champs Elysees. The Theatre de l'Etoile, Royal Pathe, and Lutetia movie theatres were torn down years ago, and only the Salle Wagram ballroom has survived.

The Empire was badly damaged by a mysterious explosion on 13th February 2005. It was demolished in the mid-2000’s and the Renaissance Arc de Triomphe Hotel was built on the site.

The cause of the blast at the 3,000-seat Theatre de l'Empire, or Empire Theater, near the Champs-Elysee was not immediately known. Interior Minister Dominique de Villepin said nothing was being excluded. He did not address the possibility of a terrorist attack.

Seven people, primarily passers-by, suffered minor injuries in the explosion, mostly scrapes from shards of glass and shock to the eardrums, said Olivier Delplace, spokesman for rescue workers. Two watchmen inside the building were among those slightly injured, police said.

Authorities rushed to the scene shortly after 6:30 a.m.

Police used sniffer dogs to try to determine the origin of the blast and to ensure that no one remained trapped in the theater or in surrounding buildings. The occupants of a neighboring six-story apartment block were able to escape without assistance.

Built in the 1920s, the theater had served in recent years as a venue for concerts, dinners and fashion shows. Designer John Galliano was to present his ready-to-wear collection there March 5.

The theater had been sold several years ago to private investors with plans to transform it into a luxury hotel, Girard said.

In its prime, the Empire Theater was a noted music hall for jazz stars and the likes of actor, crooner and dancer Maurice Chevalier.

An other big capacity theatre in the center of Paris vanishing
with such a long story in French show business.
The empire was surrounded by Seven theatres no one survived.
lutetia, royal pathe, theatre de l'etoile , univers, ternes cinÃ©, cineac ternes (a huge concrete art deco building) salle wagram.

Exterior of the Empire showing when “This is Cinerama” played there: View link