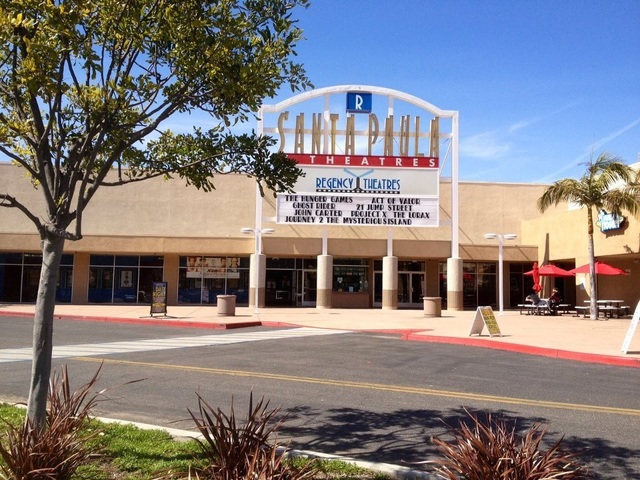 Opened in the summer of 1995, the Santa Paula 7 Theatres screen first- and second-run films for the heartstoppingly amazing price of 50 cents before 6 PM and $1 after 6 PM. It was run by the Wallace Theatres chain (WTC), which operated the Wallace Malibu Theatre on PCH in Malibu.

Purportedly, theatre #6 is haunted: “Employees report feeling uneasy in the theatre while cleaning. There are reports of a man seen sitting in one of the seats who vanishes and claims of apparitions appearing in the projection booths.”

This is the only operating theatre in a small town (pop. 30,000+) that, at one time or another, had seven theatres running. The Tower (formerly the Mission, Columbia, Lyric, and Fox Tower Theatre) still remains closed and boarded up, just a bit further east on Main Street.

In 2008 it was taken over by Regency Theatres.

So much for the bargain matinee! Coming soon – $3 matinees (instead of 50 cents) and $5 general admission. A well-kept theatre, with auditoriums that tend on the cold side…

Looks to be a Regency Theater now:
http://tinyurl.com/ydw7r3s

Somewhere I got the idea the City of Santa Paula now owns the Tower theater building. I think they had a meeting there within the last 6 months.