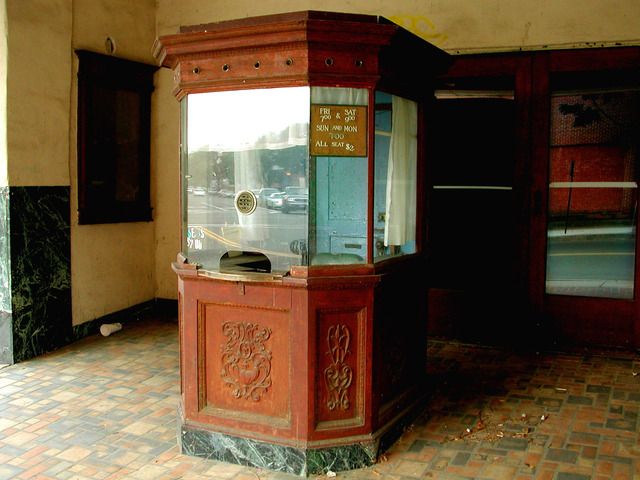 The Elms Theater opened in 1927 and was the first theater to be wired for sound in the city. The name was changed to the Rivoli Theater in 1932. According to an August 15, 2007 article in The Republican, “The Rivoli was a smaller version of the spectacular movie palaces of the 1920’s, with marble pillars, wrought-iron chandeliers, carpeted corridors and halls embellished with painted murals depicting Greek and Roman mythology and, on the town’s largest stage, a huge movie screen surrounded by rich purple drapes.”

Renovations were executed in 1984 and the theater remained somewhat busy until the multiplex boom hit the area.

The Rivoli Theater was one of many gilded small town movie palaces that were owned and operated by the Goldstein family. Their once mighty empire has dwindled to just a few existing theaters and one of the last to close in 2000 was the Rivoli Theater.

Ronald Goldstein finally sold the massive theater, which claimed to have the largest screen in New Engalnd.

The building sustained water damage in March 2001, due to a water main break, but the theater was not harmed. Its original, free-standing, ticket window is a rare sight in the area and its vintage stylings are apparent even to this day.

The Rivoli Theater is listed as temporarily closed, but with each passing day, its renaissance seems further away than ever.

I stopped by the Rivoli the other day. The place is still closed, with neat, large piles of seat standards and armrests in the lobby. It does not look like much has gone on there recently. I recall seeing films there in the 80’s. On the faux balcony in the rear of the theatre there were two huge air conditioner units that pumped cool air in the house (See the excellent pics on Cinematour.com). Their sound was loud and disturbing to the movie. I also remember looking into the orchestra pit and seeing piles and piles of empty cardboard boxes and other junk. A lot of the seats were broken.
I frequently sought to go to Western Massachusetts Company locations as they were all extremely run down and I couldn’t believe they were allowed to remain in operation. Around that time (mid 80’s) they were operating the Palace and Showplace in Pittsfield, the Showplace and Garden in Greenfield, the Casino in Ware, the Bing in Springfield, the Calvin in Northampton, and the Amherst Cinema. Some of their closed locations included the fabulous Paramount in Downtown Springfield, the Capitol in Pittsfield, and the Victory in Holyoke.

There is much work being done, especially the exterior. I saw roofers working and windows in the small vacant retail shops replaced. The marquee has been taken down revealing the orginal one. The classic ticket booth, gone! Hopefully, these items will be preserved. The entranceway looks like a black hole now. Hopefully, that will change soon. I kind of think Konrad W. is taking the conservative route financially and doing gradual reconstruction.

Thanks to the generosity of Mr. and Mrs. Ronald Propst, we hope to have the instument playing Christmas 2006.

Latest progress report has the exterior completed, but the interior notta. According to a newspaper report Konrad must arrange additional financing in order to complete the project. Personally, I hope he isn’t in over his head. That building will be the focal point in the revitalization of downtown Chicopee.

According to a newspaper article written today by Stephen R. Jendrysik, Chicopee Historian, in the Springfield, MA Republican, the Rivoli opened as the Elms Theater in 1927. Became the Rivoli in 1932. Originally ran silent movies but was the first Chicopee Theater to be equipped for sound. Theater screened MGM, Paramount, Twentieth Century Fox, Warner Bros. and RKO Radio pictures usually about a week after their showings in Springfield. The ceiling had stars and clouds. Ushers in their brass-buttoned uniforms escorted well-dressed patrons to their seats. Rich purple drapes surrounded the screen. Organ music was provided by Miss Rene Breglio prior to movie showings and the occasional silent picture. Mr. Jendrysik also mentions that the Exchange, Midway, Willow, Pastime, Wernick and Royal were other theaters operating from time to time in Chicopee.

According to that article the interior of the theater has been gutted – a shame. Much of the space has been renovated into offices and retail, but the new owner plans to have a theatre utilizing the stage house and front of the old auditorium to create a new venue for concerts, stand-up comedy and the occasional movie.

The Rivoli in Chicopee is listed under Western Massachusetts Theatres inc., 101 Bridge St., Springfield (Nathan Goldstein) in the 1942-43 Motion Picture Almanac. It was apparently too new (as the Elms Theatre) to appear in the 1927 Film Daily Yearbook, but there was a Playhouse in Chicopee listed there, with 900 seats.

A recent article about the Rivoli says they hope to open the nightclub in six or seven months. http://www.masslive.com/news/index.ssf/2012/08/rivoli_owner_hopes_to_reopen_t.html

The Theatre Historical Society archive in IL has the MGM Theatre Report for the Rivoli. Located on Springfield St., Good condition, 1261 seats; has been showing MGM Product for 10 years. There is an exterior photo taken in May 1941. Competing theater is the Victoria.

I went by there yesterday and the box office is gone now, the doors are boarded up and the building is for rent. I posted 2 photos on the tab above.