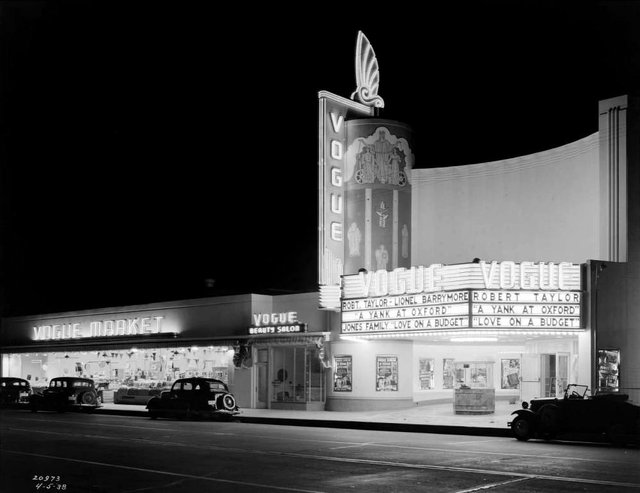 The Vogue Theatre was built in 1937 by A.V. Perkinson according to the building permit I saw at the South Gate City Hall. It was designed in Art Moderne style by famed theatre architect S. Charles Lee. The Vogue Theatre was still open in 1956, but had gone from listings in the Film Daily Yearbook by 1957.

In later years the snack bar area was used to sell tickets for performances of Spanish-language live comedy shows and films. The name of the theatre was later changed to the Los Pinos Theatre (today going by the Spanish version of that name, Teatro los Pinos). The Teatro los Pino was demolished in January 2018.

The Arden Theatre was located just a little more south on Long Beach Boulevard in the city of Lynwood.

According to the county assessor, the building at Long Beach and Glenwood was built in 1941, with an effective build date of 1946. I wonder if it could have been the Trianon Ballroom, a popular night spot of the 1940s and the site of several live remote broadcasts of a music show called One Night Stand produced by the Armed Forces Radio Service during WWII?

The building also looks like it could have been a bowling alley. Bowling became a fad in the 1930s-1940s, and L.A. used to be littered with streamline moderne bowling alleys.

I figured if it was a theater it would have been added already. Thanks for the information.

There are at lest two vanished South Gate theatres missing from Cinema Treasures though. There were houses called the Gem and the Avon, which probably existed during the silent era. They may have been knocked down by the 1933 earthquake, as many buildings in that area were.

The UFO guy headlining at the Teatro states on his poster “The Silent Invasion – They are Already Here”. I guess we’ve been warned.

Thanks for the pictures showing the inside of the vogue theatre as it now. Offen wondered how it looked inside. The building at Long Beach Blvd and Glenmore was a bowling alley. South Gate Bowl, The Trianon Ballroom was on Firestone Blvd down the street from Long Beach Blvd. Owned by Horace Heit, the bandleader. The Avon Theatre was at Long Beach blve and Santa ana st. Ford dealer took it over later in years. The Gem theatre I have no idea where it was, but always wonder.

I saw an ad for a comedy show at this theater on a local channel the other day. Good to see the theater alive and well, and in use.

Here is a b&w photo:
http://tinyurl.com/y3md7wh

From the August 22, 1925 edition of the Los Angeles Times comes this report regarding South Gate and its first movie theater: â€œA new building is now nearing completion on State Street, which will have a seating capacity for 300. It is expected to open about the first of September with shows nightly.â€
This project evidently came to fruition since the 1927 Sanborn map for South Gate shows a movie house located at 8463 State Street in South Gate. Unfortunately, neither of these sources provides a name for this theater. This theater site has been torn down.
The property where the theater once stood is now occupied by the Greenfield Care Center according to Google Maps. The Los Angeles County Tax Assessor records show the Greenfield facility was constructed in 1970 and occupies a total of 8 lots from the 3254 tract. What happened to the theater between its 1925 construction date and 1970 when the Greenfield site was built remains to be discovered.
Could this be the demolished Gem Theater? (Another possibility could be the South Gate 15Â¢ Theater advertised as an Independent Theater concurrently in the Los Angeles Times with the Gem â€" primarily in the 1940â€™s.)
Thereâ€™s only one Ford Dealership that can be found in South Gate on Long Beach Boulevard in the Los Angeles Times Archives: Lindt-Wilson Ford. Lindt-Wilson had 2 recorded addresses on Long Beach Boulevard. The earliest address is 8707 Long Beach Boulevard (now a Tune-Up Masters per Google). A second, later address is 8012 Long Beach Boulevard. (Santa Ana is a cross street for this location.) The Lindt-Wilson move to 8012 had taken place by 1959. (Based on when the L.A. Times Ads started reflecting this as the Lindt-Wilson place of business.) If this was the theaterâ€™s location, it could not have been operating there any later than 1959.
(Using Google for a reference once more, this location is a Burger King. The Los Angeles County Tax Assessor Records show the current structure on the property was built in 1999. The County considers the address of the existing structure, i.e., the Burger King, to be 8012 Pacific Boulevard in Huntington Park. As far as being a South Gate / Huntington Park address Google is neutral. The point comes up on their map whether a search is done for 8012 Pacific or Long Beach Boulevard â€" North of Santa Ana Street, South of Cudahy Street on the East side of the street.)
Is the 8012 address the former site of the Avon?
The Trianon Ballroom (recently razed) was at 2800 Firestone Boulevard.

This theatre has recently been demolished since January 2018. This theatre listing should have its status updated to “demolished”.