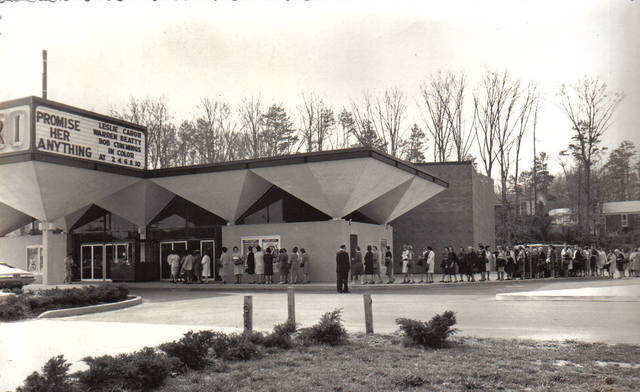 The Capri Theatre opened on October 16, 1964, with 995 seats. The opening film was Polly Bergan “Kisses For my President” It was a single screen theatre owned and was operated by Charlotte based Stewart and Everett Theatres. The theatre itself was a real showplace and it was the second moviehouse to open that year (the other was the Park Terrace Theatre which opened in May). It was also the second cinema along Independence Boulevard (the other was the Charlottetown I & II, owned and operated by General Cinema, which opened in 1963 as one of the first twin theatres to be established in North Carolina).

The overall decor of the Capri Theatre (with its ‘upside-down’ pyramids overlooking the front entrance) were impressive state of the art features of its interior, that were revolutionary for its day, and Charlotte loved it. The seating was plush, rocking chair seats and it had brilliant widescreen projection that was capable of showing both 35mm & 70mm films.

The Capri Theatre became the first to show premiere engagements, that were exclusive to North Carolina. The Rex Harrison, Audrey Hepburn musical “My Fair Lady” had its North Carolina Premiere engagement here in 1964 where it played to capacity crowds during its exclusive roadshow run. Other N.C. Premiere’s that played the Capri Theatre were “Thoroughly Modern Millie” in 1967, as well as the documentary feature “Stockcar” in 1967 when it was still a single screen theatre.

The theatre was ‘twinned’ on March 7, 1975, when a second building was constructed that had 400 seats. On November 20, 1981, the original auditorium was split into two screens down the centre, making it a triple screen operation, now with a total seating capacity for 1,286. By 1986, the theatre was acquired by Carmike Cinemas, and it was closed in 1996.

Peter O'Toole and Katherine Hepburn in THE LION IN WINTER played here as a reserved seat engagement at Charlotte’s Capri Theatre on February 12, 1969. It was the ONLY roadshow presentation that played within the two Carolinas with two performances during each showing.

In doing some research on this theater i have found out that the theater actually opened on October 16th, 1964 and not on November 2nd as listed above. Not a huge deal but thought it would be good to post. I will post a picture of the opening night ad that proclaims the theater as “a new concept in theatre design” and also a blurb about the opening of the theater in the photo section.

I love that one of the pictures online is of “Star Trek – The Motion Picture” playing at the Capri – saw it there multiple times. Back when the movie was released, McDonald’s ran a Happy Meal tie-in campaign. What made it more special is if you brought your empty Star Trek Happy Meal box to the Capri, they would fill it with popcorn for free. I had a stack of those boxes (all legitimately purchased), so I honestly don’t recall how many times I saw that picture, maybe 3 or 4.

I saw many, many movies at the Capri through the 70s and 80s. At the moment, only “Star Trek – TMP,” “Superman III,” “ and Star Trek III: The Search for Spock” are springing to mind. I remember very well that one of the auditoriums had a stage. I only ever saw maybe someone during a radio station promotion on that stage, though.

I had a very, very brief work experience at the Capri in the late 80s, when it was a second-run house and sadly on it’s way out. I worked at the Town Cinema 6 over by UNCC and they were both run by Carmike at the time. We frequently ran supplies back and forth to each theater (CO2 tanks, popcorn oil drums, etc.), so we were all familiar with each other. After a management change, a buddy of mine at Town Cinema, where we were both assistant or relief managers, was asked to come over and help manage the Capri.

At that time, the Capri was run by a family (or at least the manager had employed her son), and I think higher management wanted someone (competent) to come in and help them – don’t mean to step on any toes, but the manager was an older lady and her adult son kept sidling up to me saying “Mama is gonna clean house.” Guess they had additional staff issues, but he didn’t elaborate.

I went over one evening with some sort of delivery and my buddy gave me a tour of the place (not the stage area – didn’t even think of it at the time). I had gotten used to having a popcorn popper in the concession area, so seeing that the Capri’s was upstairs by the projector booth was strange to me.

When a show was about to start that night, I jumped behind the concession stand to help (I don’t think they needed me to, but I was trying to justify hanging out there – I always liked the place). No one warned me, but their butter pump had a heck of a kickback. One pump and I was wearing the oil when it splashed all over the top of the popcorn. Oh well, it was still fun. I wish I had hung out more there while it was still in operation. A great old theater!

binchwb: You probably worked there when they showed “E.T.” too which brought in capacity crowds in 1982. Also played here was the original “Lethal Weapon” movie in 1987.

Well, no. I did see E.T. at the Capri, but I was 11 at the time. Saw Lethal Weapon at a General Cinema in Pineville that had just opened. We had Lethal Weapon 2 at Town Cinema 6 in 1989 while I was there. Talk about capacity crowds, “Friday the 13th Part VII – The New Blood” sold out on Friday, May 13th 1988 at TC6. That was a wild crowd.

Nice article on the Capri posted yesterday by The Charlotte Observer http://www.charlotteobserver.com/news/local/news-columns-blogs/retro-charlotte/article196133484.html 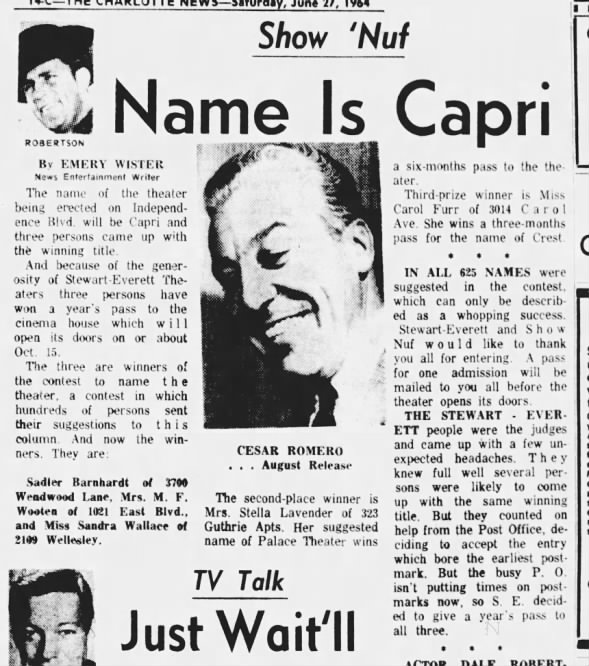