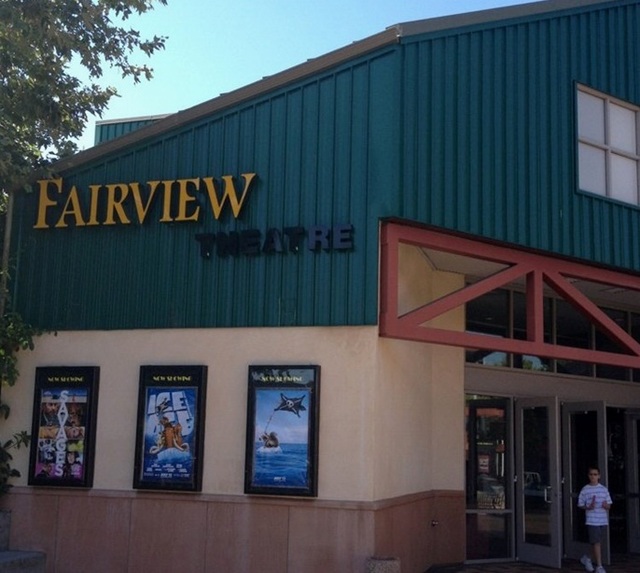 Gutted and closed as of February 2005. Possibly to be replaced by office space.

The Metropolitan website says it’ll be reopened as a theatre in summer 2006. Yay.

This theatre is now a triplex. Metropolitan’s website has gone back to calling it the Fairview Theatre. The website of Thorpe Associates, the architectural firm that designed the renovation, describes the project as “…3-screen, 484 seat multi-theatre complex addition and remodel….” It is all stadium seating. The site also displays a couple of renderings of the building.

As I said in my comment just above, Thorpe Associates were the architects for the 2006 expansion and remodeling of the Fairview.

Now I’ve found an item in the January 10, 1966, issue of Boxoffice Magazine which reveals that the original architect of the Fairview was Robert Kleigman. Construction was set to begin in March, 1966, with an opening target of mid-June. The eighth Santa Barbara County theater operated by Metropolitan Theatres, the Fairview opened as a single-screener with 750 seats, and was equipped to show 35mm and 70mm films on its 72-foot screen.

I don’t know yet if Kleigman designed any other theaters, but he was the architect of Metropolitan Theatres Corporation’s headquarters building in Los Angeles, completed in April, 1966.

The Fairview reopened as the Fairview Twin on December 23, 1978, according to an article in Boxoffice Magazine, January 9, 1979. Each of the two auditoriums had 300 seats. Metropolitan Theatres expanded their Cinema Theatre, also in Goleta, at the same time, and it reopened as the Cinema Twin earlier that December.

Asx to the above comment, while I can’t comment on whether it had 70mm equipment, that 72 foot screen size is a joke. I saw a double feature of BUTCH CASSIDY and HEARTBREAK KID in the summer of 1974, and the screen was more like 35 feet or so wide, with scope opened up.

Strange to hear how things have changed. My father was the projectionist there for several years in the late 60’s early 70’s. My brothers and myself spent many many days there…watching movies… hanging out in the projection booth & we cleaned the theatre between shows…during the summers. Tons of memories there…..

I added a superfluous “e” to the end of the name Thorp in my earlier comments. The architects for the 2006 remodeling of the Fairview Theatre were Thorp Associates, a firm based in Estes Park, Colorado. Information about, and photos of, ten of the cinema projects they have designed, including this one, can be seen on this page of their web site.