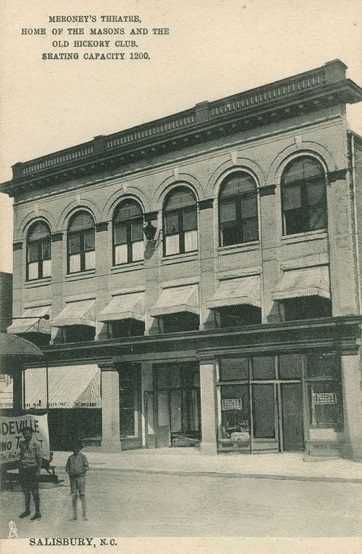 The Meroney OperaHouse was built in the early-1900’s. Originally it was a playhouse with a tunnel to a hotel across the street. It became a movie theater from the 1920’s. It was a simple yet elegant movie house with a large balcony.

It prospered throughout the 1970’s, showing first-run features and late shows. I saw “Jaws” there when it came out in the 1970’s. In the early-1980’s, it was twinned and renamed Towne Cinemas. The balcony was closed off and turned into a very cramped uncomfortable second theatre.

I worked there as a projectionist when it was a first-run theatre in the mid-1980’s. As weekend downtown traffic decreased due to a local ordinance banning late-night automobile “cruising” by teenagers, the theatre fell on hard times. It became a dollar house for a few years and then closed in 1988.

It sat in disrepair for a number of years until it was completely renovated into a performing arts house. It is supposed to look now exactly like it did in the 1900’s when it first opened. When I worked there in the 1980’s, many of the original props and backdrops from 1920’s were still in the theatre, along with movie posters and signs from the 1950’s and 1960’s. There is a lot of history in this simple downtown theatre.

We, too, have a Center Theatre. It’s a 1940’s era Art Deco movie house in the small town of Dover-Foxcroft, Maine. It sat vacant for the past 30 years, except for several small businesses that occupied the lobby area. A group of folks in the area got together, formed a non-profit corporation and started raising money to purchase the building and transform it into a performing arts center. We are seven years into the project, have bought the property and are poised to begin our third phase of restoration. At the same time, we’ve been organizing programming events at different venues around town, occassionally in the theater itself. It’s very slow going, but
satisfying, if you can can keep the energy up and keep pushing forward despite the hard fund-raising environment. Good luck with your project. There’s lot’s of people out there just like you trying to save these old theaters and reinvigorated their towns and neighborhoods. Bob Winters:

I just spoke to a lady today from Salisbury NC and she mentioned this theatre, but I recall her giving me another name other than Center Theatre.

This theater is the Meroney Theater.

The historic Meroney Theater, originally called the Meroney Opera House, was built between the years of 1905-1906. Once a well-known touring house for live performers, the Meroney Theater has hosted a number of famous actors, speakers and musicians. Actresses Sarah Bernhardt and Lillian Russell, President William H. Taft, and legendary composer John Phillip Souza have all graced the stage of the Meroney Theater, captivating audiences. As its early days as the premier performing outlet of the area came to a halt, the Meroney Theater was eventually turned into everything from a movie theater to offices to a meeting facility for local organizations. Finally, in 1991, individual donors began providing the necessary funds to make the Meroney Theater once again a special place for the performing arts. The Meroney Theater was completely restored to its original turn-of-the-century splendor in October, 1995. Today, audiences can experience the remarkable talent of the Piedmont Players, who are proud to call the majestic Meroney Theater home.

I went through the Centers in NC, no luck matching up this theater as no location is given. Date would be 1944, I think. Any help is appreciated:
http://tinyurl.com/3bya6c

This theatre has a very long history and a number of name changes. It was the MERONEY, then the STRAND, then the STATE, then the CENTER, then the TOWNE CINEMA, and now is back to the MERONEY.

It opened as a theatre for live performances with motion pictures added in the 1920s, not the 1950s as stated above.

thornhillstuff: There was also THE ROWAN PLAZA TWIN THEATRES that was located on the opposite side of the city off Statesville Boulevard to opened in 1979 as Salisbury’s first twin cinema,and closed in 2000.

The SALISBURY MALL CINEMAS located at Salisbury Mall off Statesville Boulevard REALLY brought on the competition and muscled it’s way as the town’s first multiplex cinema that opened in 1986. THE TOWNE THEATRE was reduced to a discount house until it closed in 1988(which was under Carmike Cinemas). THE ROWAN PLAZA TWIN became a discount house under Carmike that year until its demise in 2000.

ALL that would change went Cinemark/Premiere Theatres Group built a huge 14 screen megaplex between Innes Street near Interstate 85 that opened in 2001.

ALL of these theatres are located in the greater SALISBURY/ROWAN COUNTY area. As of this writing, The TERRACE, The ROWAN TWIN, are gone leaving the SALISBURY MALL CINEMAS and the TINSELTOWN 14 as the only movie theatres within the entire town. With the exception of THE MERONEY which has been turned into a community theater.

“In 1907, the Bijou operated on the first floor of Meroney’s Theater as a movie and live-action theater. September 1909 saw the introduction of the Grand theater to the Meroney building, which was succeeded by the Grubb theater in 1911. The theater also operated under the names of The Colonial, The Strand, The State, Centre, The Towne Theatre, and Towne Twin Cinema (the theater’s name when it officially closed).”

The house returned to its original name on reopening as a live theater in 1995. Additional details about the various theaters can be found by using the drop-down menu of the “Chose a venue” box on the Salisbury page.

Yes the Meroney is still open, but there are no movies shown there. It is used mostly by the Piedmont Players to portray plays.