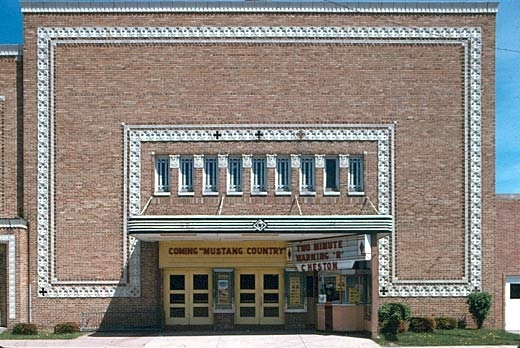 This 1923 Prairie style single-screen movie house was restored to its original appearance in 1990, and features a balcony and box seats. The Grantland Theatre not only shows first-run films, but is also home to the Lancaster Community Players theater company, which gives performances several times a year.

Here is another photo:
http://tinyurl.com/2tw488

The Wisconsin Historical Society provides this web page about the Lancaster Municipal Building, which also houses the Grantland Theatre (the Historical Society page erroneously refers to the house as the Grantville Theatre.) Despite its 1930s Art Deco look, the building was actually completed in 1923 and had been designed in the Prairie Style by Madison architects Claude & Starck in 1919.

Louis W. Claude and Edward F. Starck established their partnership in 1896 and dissolved it in 1928. They designed at least two other buildings combining city offices and auditoriums; one at Mineral Point, which operated as a movie theater (and still does,) and one at Platteville, which might have shown movies, as it is known to have hosted vaudeville shows. The firm also designed at least two other theaters; the Majestic in Madison and the Fenway in Fennimore, Wisconsin.

The 1989-1990 remodeling of the Grantland Theatre was carried out by the City of Lancaster on behalf of AGT Enterprises, a company then operating two small theaters in Prairie du Chien, Wisconsin, who had agreed to operate the house under a lease, conditional on its renovation. The project included removing the last two rows of seats in order to expand the lobby to accommodate a modern concession stand. Later known as Star Cinema, AGT grew to operate 95 screens in nine locations in Iowa and Wisconsin before selling most of its holdings to Kerasotes Theatres in 2008.

Hi, I wonder if anyone knows whether African-Americans were able to attend this theater in the 1920s? thanks.

I visited this theatre in June of 2021. It was Cinema Appreciation Week so the Garland was showing a double feature consisting of A Quiet Place 1 & 2. The entire audience for this double feature consisted of four adults and two children. The Municipal Offices and Police Dept are an extension of the theatre building. Seating on the main floor has been upgraded with high back seats and cup holders. The balcony retains seats which look like are from the 1950’s or 60’s. If my count is accurate, balcony seating is 137. Main floor seating is about the same because of added leg room created by removing (my best guess) every third row of seating. The newer seats are also a little wider. This is a lovely building and theatre. Ornate but not overly so make for a wonderful movie experience. This is a theatre most of us would love to own. Yes, it has opera boxes.