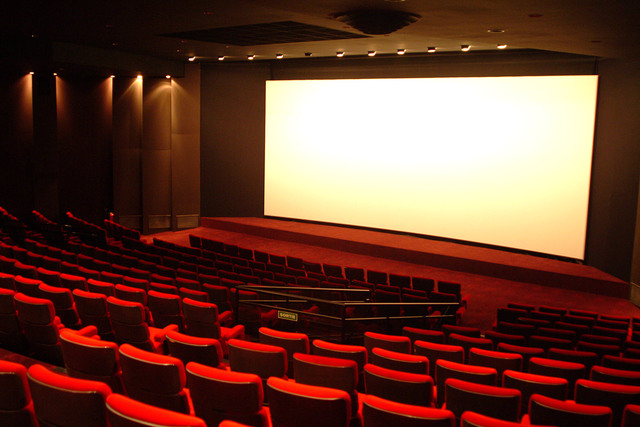 On a large parcel at the corner of the Avenue des Champs Elysees and the Rue de Marignan, a massive Art Deco style office building was erected, designed by architect A. Arfvidson. It included an elegant brasserie at the ground floor, shops and a movie theatre which was designed by architect Eugene Bruynell located beside the front building. A rotunda was at the ground level on the way to the stalls.

The Marignan-Pathe opened in June 1933 with the luxury of a movie palace. The fine Art Deco style design included the Pathe rooster on the walls, a mezzanine and a deep balcony. The orchestra pit had iron work bannisters and the orchestra could move to the level of the stage. Seating 1,800 patrons, it was one of the biggest movie theatres in Paris after the Gaumont Palace, the Rex and the Paramount Opera.

People of Paris discovered Walt Disney’s “Snow White and the Seven Dwarfs” at the Marignan and during World War II, it was a “soldaten kino” for the German military invaders.

A 1957 refurbishing did not alter the design but the stage and orchestra pit were no longer used and stereo sound was installed. Many big premieres took place here and first run movies were presented.

Usherettes who remembered the premiere of “Doctor Zhivago”, said people were drinking vodka in the Russian way, throwing the glasses on the floor. The movie was a hit with a 70mm print.

By 1968, the Marignan was considered an old fashioned cinema and before closing for remodelling, it was loaned to the students during 1968 May Revolution for meetings. It was closed in May 1968 with Elizabeth Taylor in “Reflections in a Golden Eye”.

Re-opening on 19th December 1968 with Omar Sharif in “Mayerling”, the new duplex which emerged from the remodelling kept the rotunda of the ground floor as a bar and the stalls became the Concorde, an underground level auditorium with armchairs a bar, and smoking. The Marignan’s former mezzanine and balcony became the other auditorium. This new format resulted in good profits and soon the Wepler Pathe, another movie palace, will be duplexed.

In 1972, a Concorde 2 was created in an unused part of the rotunda and later the Marignan was triplexed, two screens in the balcony and in the former stalls, a 500 seat theatre. Two more screens were added, a 70 seat underground one and a 100 seat one, replacing the lobby of the balcony.

In 1992 the seven screen Marignan was under control of the Gaumont France chain and the space of the two former balcony screens are converted to one stadium style auditorium seating 400 with a wide screen. Digital sound was added in four of the auditoriums.

Gaumont France had plans to convert the Marignan to a luxury multiplex, but then changed its mind, instead just remodelling the cinema in 2003. It was re-named Gaumont Champs Elysees.

Several moviegoing memories of this complex over the years…dating back to the two screen Concorde – Marignan days. Remember seeing a real Eurotrash potboiler starring Orson Welles The Battle of the Neretva here, as well The Elephant Man, Down & Out in Beverly Hills, True Confessions here in first run and more recently Die Another Day shortly after first run in one of the smaller screens. The complex could really stand an update. The Champs deserves 4 stadium seating screens instead of 6 irregular ones

The first time we went here was when Sin City (2005) was released, we bought out tickets, we weâ€™re shown the general direction, and headed off underground into the rotunda. Found our screen, as there was no one about, we thought it was then okay to enter, we sat down, in the dark, then fixed our eyes onto the screen, thinking that the Ads were on. Errâ€¦NO. We had in fact walked into Sin City and its last twenty minutes shakes head in disbelieve, it must be a French thing. I mean, no one said, â€œwait hereâ€.

We stayed until the end of the next run, hid our heads while the lights came on, and what was odd is just where you go to EXIT. It seems it is what looks like a â€œfire exitâ€, going up the long, wide steps to open the door with the â€œpush bar to open door" handle which then brings you out into a side street! Very French we thought.

Been twice since: Batman Begins and Superman Returnsâ€¦if you get the chance to go, then go, itâ€™s a great place to see a film and visitâ€¦