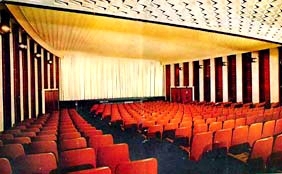 A new mall called Galerie Point Show was built on the Avenue des Champs-Elysees in 1971. It included two movie theatres: a triplex in the middle of the mall named Elysees I, II, III (which has its own page on Cinema Treasures) and the Gaumont Champs-Elysees with entrance on the Champs-Elysees. It was the last single screen ever built in Paris and the style of the auditorium is elegant and comfortable.

Jacques Tati’s “Traffic” opened the Gaumont Champs-Elysees on 15th April 1971 and ran for months. The foyer and lobby were spacious enough to welcome the patrons before the movie and during the intermission.

Kubrick’s “A Clockwork Orange” played to a full house for months, as did a revival of “The Sound of Music”. With “Hair”, patrons discovered the first Dolby stereo movie–the beginning of the song “Age of Aquarius” was a thrill.

In 1985 a terrorist bombing happened in the mall and made a hole in the ceiling. Nobody was injured among the audience but the Gaumont Champs-Elysees closed for a while.

Around 1990, screens were added to the nearby Gaumont Ambassade and in the same area, the Gaumont Colisee closed and later the Pathe Marignan was operated by Gaumont. All these screens were close to each other and the Gaumont Champs-Elysees was still popular with a 500 seat capacity. A 1998 refurbishement gave a wider screen and new seats.

But a desire by retail chains to find better spots in the mall brought about the closure of the movie theatre on 31st December 1999 with Thilen Lhondup in “Himalaya”. It became a Benetton store.

Indeed this cinema closed in 1999 and must not be confused with the other cinema bearing the same name, still in operation today. Here is a short film on YouTube, made during its last year of operation, showing the cinema front and the projection booth.

And an old web page on the Silverscreens site.