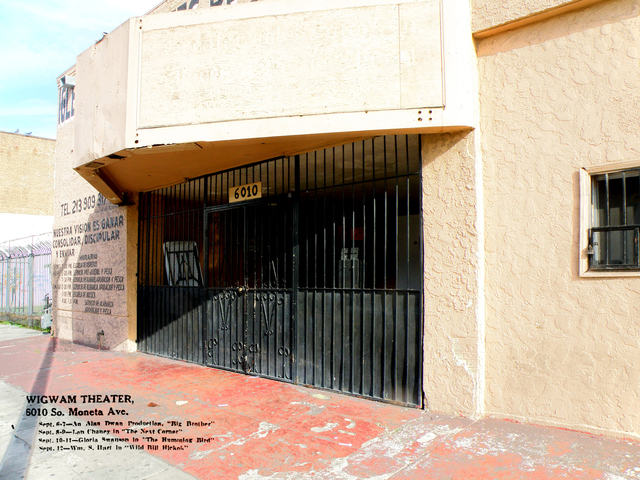 The Wigwam Theatre was opened in 1913. This house (located across the street from the former Century Theatre) now functions as the Greater Holy Mountain Church of God in Christ.

Listed as the Wigwam Theater at 6010 Moneta (Broadway) in the 1925 city directory, so that should be an aka.

The introductory paragraph for the Aloha Theatre says that the Century Theatre across the street from it has been destroyed. Not so, as ken mc has posted recent photos of the Century’s building (linked on its page) which now houses an upholstery supply company.

It was already called the Wigwam Theatre in 1915, according to the listing in the L.A. City Directory that year. Wigwam Theatre might have been its opening name.

My grandparents rented and operated this theatre from 1935 to 1937. My dad recalls the name to be the May Theatre. My grandfather was the projectionists, grandmother was the ticket seller, my uncle (9-10 years) was the usher and my father (5-6 years old) would stay in a room next to the ticket window. My dad recalls seating of about 400-500 seats, not as big the Century theatre across the street.

It was the Aloha in 1942, according to the city directory of that year.

The 1929 city directory lists the May Theatre at 6010 S. Broadway. I can’t find listings for a theater at this address in directories from the 1930s.

The LA Library just put together several new volumes of the directories in the downtown branch. These aren’t falling apart like the old ones. They span about 1915 to 1942.

This house was built in 1913. The December 2, 1912, issue of Southwest Contractor & Manufacturer had an item saying that a permit had been issued for construction of a one-story brick theater at 6010 Moneta Street. The plans were by architects Miller & Hart, presumably not a major firm, given their address on West 28th Street.