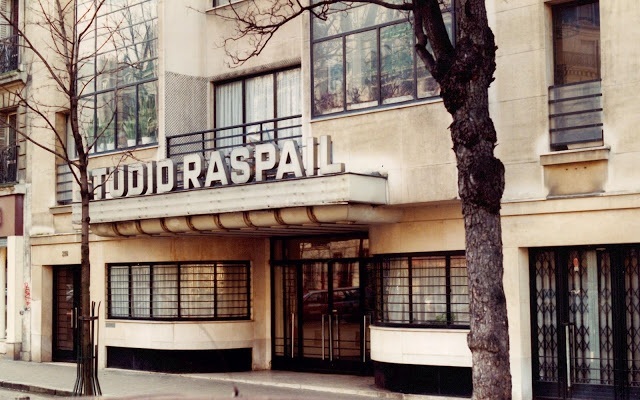 Located in the south of the city centre. This fine Art Deco building was built in 1932 with flats above, the architect being Bruno Elkouken. Between two other buildings, this was a secluded theatre with a very sober design with seating originally provided for 350, but now reduced to 160 in the orchestra and 60 in the small balcony.

It opened on 18th September 1932 as a 300-seat art house movie theatre named Raspail 216, after the district of Montparnasse. Famous artists such as Modigliani lived in the flats above this theatre.

After a short time as the newsreel cinema Paris Soir Raspail, the Studio Raspail became an art house cinema again. Around the 1950’s, a renovation gave an impressive marquee and the auditorium received new lighting on plaster shelves. New comfortable club armchairs prompted the advertising on the façade: the Studio Raspail is the most comfortable movie theatre of Montparnasse.

The program policy was perfect for movie lovers: old Westerns, Chaplin movies, and Avant Garde films. However, around the 1980’s, the location became too far from the newly built or multiplexed movie theatres of the district and first run movies did not stop the decreasing profit. The Studio Raspail closed at the end of 1982.

After being dark a while, the French post office operated the theatre as a cultural centre, a major refurbishing returned the theatre to its former sober design, with live performance facilities and a new marquee.

A lot of events gave the opportunity even for people passing by to visit the theatre for free plays. The building is listed and is one of the finest Art Deco buildings of the city.