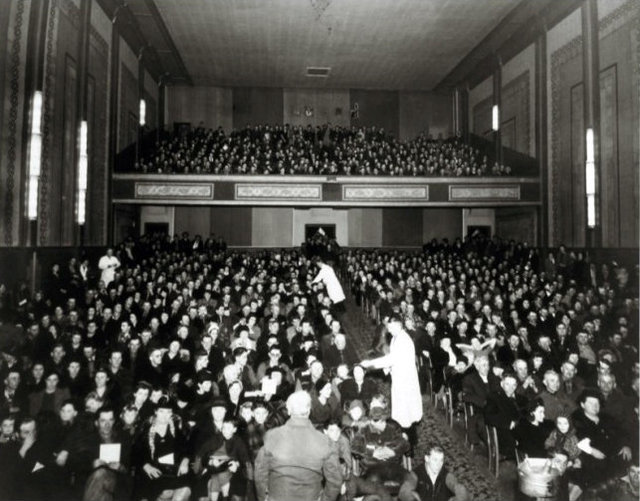 The Yankton Opera House opened in 1902. In 1921, it was remodeled for use as a movie house, complete with a $10,000 pipe organ, chandeliers and new seats. It was named the Hess Theatre after it new owners.

In 1929, the Hess Theatre showed its first sound motion picture, the same year the theatre received another name change, as the Dakota Theatre. It was also around this time that D.W. Rogers remodeled the theatre in spectacular Art Deco style, its facade covered in cream and brown-colored tiles, with chrome highlights. The auditorium received modernistic designs on its side walls and over the proscenium arch.

The Dakota Theatre closed in 1987, and three years later, was purchased by the Dakota Theatre, Inc., a non-for-profit organization. The Dakota Theatre was beautifully restored to its former appearance, a wonderful example of Art Deco architecture, and is today used for live theatre and other live performances.

Here is another photo:
http://tinyurl.com/mqkq6

Here is an undated photo:
http://tinyurl.com/yw9xj8

This is from Boxoffice magazine in January 1960:

A.R. Johnson, who has the Dakota Theater at Yankton, reported six feet of snow in front of the place as a storm swept the area. For the first time, the Film Transport truck was tied up and had to wait at Yankton for the roads to be opened.