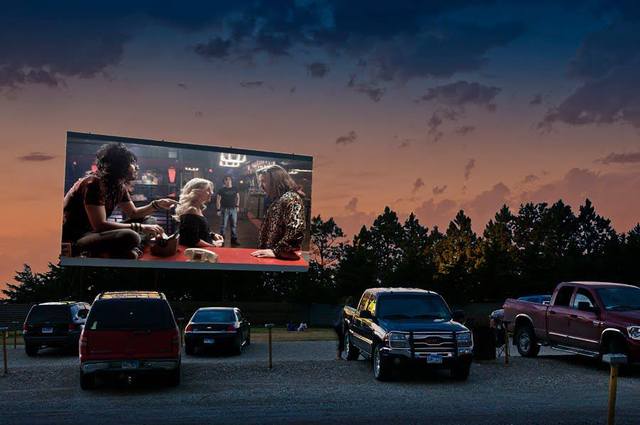 The Midway Drive-In opened on June 18 1953 with Ann Sheridan in “Take Me To Town”. It remained in the same family until 2004. The theater was named for its position midway between Miller and St. Lawrence. It originally could accomodate about 300 cars. It is still open, one of only a few drive-in theaters still operating in South Dakota. The Midway Drive-In’s season runs from May through August.

Midway Drive-In was constructed in 1953 and has been showing movies every summer since then. It was originally owned and operated by Ernest Schweigerdt and John Kirschenman.

Ernest’s daughter, Alyce, and her husband Marvin Oligmueller purchased the drive-in in 1963. In 1968 a strong summer storm came through during the showing of a movie. The wind was so strong that it blew the screen down. The screen was rebuilt right away and movies were shown throughout the rest of the summer.

In 2004, Midway Drive-In came under new ownership and continues to offer movie-goers in central South Dakota great movies and that nostalgic “drive-in” experience. The current owners are Sally and Duane Resel, Steve and Lori Resel, Stephanie and Jim Bonebright, Sarah Resel, and Mike and Nan Donlin.

Midway Drive-In is one of only five remaining drive-in theatres in South Dakota, the first to convert to digital projection. Whether it’s your first trip to a drive-in or you’re returning to rekindle that unique drive-in feeling, Midway Drive-In is the place to See the Stars from your Cars.

From a photo of an inscribed, uh, something on its Facebook page:

Originally owned and operated by Ernest Schweigerdt and John Kirschenman, Midway Drive-In Theatre was built in 1953, and is located midway between the towns of Miller and St. Lawrence, which led to its name. A comedy, “Take Me to Town” with Ann Sheridan, Sterling Hayden, and Philip Reed, was the very first movie shown June 18 that year.

In the early years of business, movies were shown every night of the summer season with two shows on Saturday and Sunday. The latest newsreels were shown on the weekends and a cartoon was featured with every change of movie title.

Schweigerdt’s daughter, Alyce, and her husband, Marvin Oligmueller, purchased the drive-in in 1963. On an August evening in 1968, a violent storm moved through the Miller area as the movie played. Although the wind was strong enough to blow the wooden screen down, within a week and a half, a new metal screen was erected and movies were shown throughout the rest of the summer.

In 2004, Midway Drive-In came under the new ownership of Sally and Duane Resel, Stephan and Lori Resel, Sarah Resel, Mike and Nan Donlin and Stephanie and the late Jim Bonebright. Midway Drive-In is one of only five (sic) remaining drive-in theatres in South Dakota in 2016, and the first to convert to digital projection. It continues to offer movie-goers great family movies and that nostalgic “drive-in” experience.

Midway Drive-In is the place to See the Stars from your Cars.