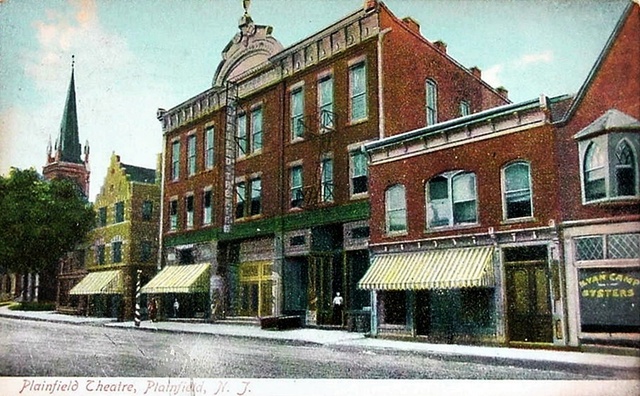 Originally the Elkwood Hall, becoming the Washington Hall and then the Amphion Theatre. Redesigned to the plans of architect Fuller Claflin, it reopened as the New Plainfield Theatre on August 24, 1905. Seating was provided for 1,353.

In 1928, the Plainfield Theatre was taken over by Paramount-Publix, and was remodelled to the plans of architect Thomas Lamb, and reopened as the Paramount Theatre on October 10, 1930. A beautiful color photograph in the first edition of Ben Hall’s “The Best Remaining Seats” shows the Paramount’s stage curtain, with the caption: “The Paramount was Thomas Lamb’s answer to Sid Grauman. The dragon motif on the curtain was repeated on the ceiling and lobby walls; the facade was Spanish”.

The Paramount Theatre was demolished in the 1970’s.

This theater was purchased by Walter Reade in the 1920s. It was indeed the old Plainfield Theater, which goes back to 1889. WJ Counihan made a contract with the Elks in 1905 to use their building as a theater. He put $18,000 in renovations into the building. Opening night featuree The Country Chairman, starring George Thatcher, a native Plainfielder.

I remember the Plainfield Paramount theater very well. Back in 1960 when I was a young girl, sometimes my mother would take me there to see old Jeanette MacDonald, Nelson Eddy movies. The theatre was a sea of deep red velvet, yellow-gold sculptures and edgings, and heavily emphasized a by-gone era. I thought it might have once been a place for live acts and first-run movies. How magical it all looked. I remember feeling so sad that entire area was torn down to make way for the “Madison-Park” renewal project, a euphemism for parking lots, then some sort of “mini-park-like” setting in a now-unsafe neighborhood.

My father (80+ years old) who grew up in Plainfield, remembers the Paramount on W. Second very well. Shortly before the Paramount’s demolition, my mom was able to make contact with the appropriate party and get into the Paramount where she purchased some of the theatre wall sconces and a hanging fixture. Though she never used them, she still has them stored and they are spectacular. I was never in the Paramount myself, but just based on those dusty lighting fixtures, the place must have been absolutely spectacular!

The theaters page of the Plainfield Library’s online exhibit Plainfield: Lost But not Forgotten says that this house began as the Amphion Theatre, and then was known as Elkwood Hall and Washington Hall before becoming the Plainfield Theatre.

According to Andrew Craig Morrison’s book Theaters, the house reopened as the Plainfield Theatre on August 24, 1905, and the architect for the project was Fuller Claflin.

This: [img]http://www.plainfieldlibrary.info/OnlineExhibits/LBNF/Images/TheaterC21204.jpg[/img] is the Paramont in Plainfield. The interior was as marvelous as the exterior. It wasn’t Chinese in style – it was Egyptian revival style (like the outside) – with two large seated gold figures (20' tall or so) seated in large recesses on either side of the stage. I imagine the pipe organ pipes were behind them.

It was torn down in the mid ‘60’s as part of the fad of “Urban Renewal” – where the federal government funded the buyout of business districts with the idea of leveling them and having something like a shopping mall take their place.

They did level the entire block, unfortunately including the Paramont.. and the block became a dirt parking lot for the next few decades as businesses around it left for the highway malls, or simply went out of business.

Really loved that theatre – it was one of the few that equaled the other theatres in Asbury Park that the Reade organization destroyed.

See the photo section for photos of the actual theatre. I have no idea what the one above was – but it wasn’t the Paramount.

When the Plainfield was remodeled in 1928, architect Thomas Lamb added the grand entrance to the right of the original building, and remodeled the original facade to match the style of the addition. The interior was extensively altered as well, of course. I’m sure that very little of the old Plainfield remained once Lamb was done with it, but the shell survived.

This reopened as Paramount on October 10th, 1930. Grand opening ad in the photo section.