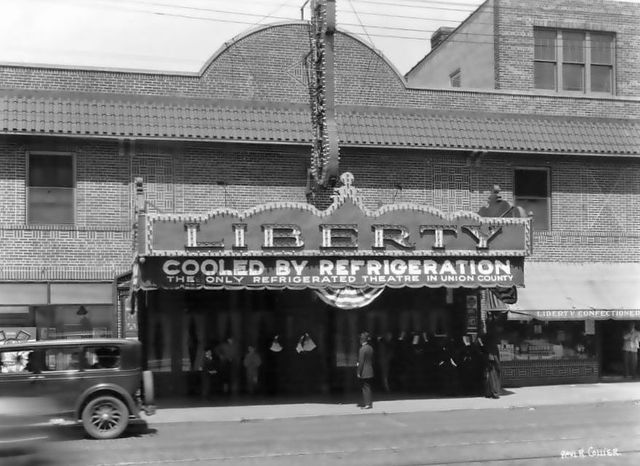 On November 11, 1925 a Wurlitzer organ (opus 1207) was installed in the building and the Liberty Theatre was opened December 25, 1925 with Harold Lloyd in “The Freshman”. Back in the early-1960’s this was a Walter Reade theatre and was one of two first-run theatres in the town. It was owned by an independent operator. By 1972 it was screening adult movies and it closed in December 1974. It was reopened in July 1975 plating regular movie, but this venture failed and it returned to an adult movie policy with a mix of Kung Fu and Blaxploitation films.

The Liberty Theatre was closed in December 1983. Today it operates as a small factory for Ductworks.

Opened on Christmas day in 1925. Feature film was The Freshman, starring Harold Lloyd.

During the fifties and sixties we kids loved the Saturday afternoon shows with Jerry Lewis and Dean Martin. I remember walking by marquee’s announcing the latest movie by Doris Day or Elizabeth Taylor. It’s the place where I first saw “Song of Bernadette” and I wanted to be a nun-saint that very night…. One time around 1962 I saw a “hand-out” in the lobby asking patrons to help put a stop the “terrible” idea of pay-TV called cable. The gloom and doom prediction saw an end to the film industry. lol

I worked here on and off from 1975 through closing night in December 1983. In fact I was working there the night it closed. DC Cab was playing and the owner-a very nice man named Fred Fleisher-told me to pack up the print as he was closing down that night.

Here is a photo taken off Google maps:
http://tinyurl.com/6qcgrj

My father worked here in the 60s and 70s. Michael Siccardi used to build minature trains in our garage.

The most memorable movie I saw here was, unfortunately …..Deep Throat.

December 24th, 1925 grand opening ad in the photo section. It opened on the next day.

Opening on Christmas in 1925, the liberty was the first theater in Union County to provide sound with their movies (1928). Also the first theater in Plainfield with air-conditioning.Throughout the course of its run the theater specialized in family entertainment. Dwindling crowds and a changing world led to the showing of X-rated films to survive in the early 70s. The theater manager was arrested in 1972, charged with showing obscene films to persons under 16 years of age. In December 1974 the theater closed, reopening in July 1975 with a vow to return to more PG and G rated movies. This did not last for long and the theater had to return to X-rated, Kung Fu and Blaxploitation movies to keep the doors open. In December 1983 the theater ceased showing movies for good. Over the years a number of businesses have set up shop in the theater, currently Ductwork Inc. is using the space. I guess we can be thankful the shell of the theater still stands as a reminder of its legacy and past. .