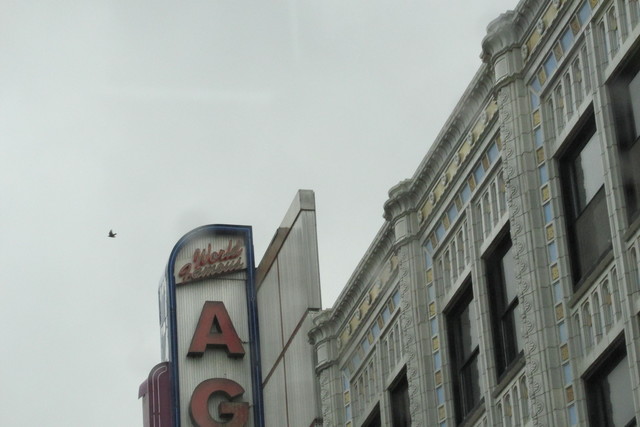 The Metropolitan Theatre, on Euclid Avenue near East 55th Street, had shown movies until at least the late-1950’s. The theatre later became the WHK Auditorium (WHK AM 1420 had its studios in the building where the Metropolitan Theatre was, 5000 Euclid Avenue, which is also known as the WHK Building). The WHK Auditorium was used for various purposes (meetings, etc.) through the 1960’s and 1970’s.

When WHK was THE radio station in the 60s, they used the auditotium for occassional rock concerts, but after they discovered they could fill larger venues like Public Hall and the stadium, this was not used for regular public events.

In the early 70s, before the real Hippodrome downtown was closed/demolished, this was playing day-and-date with them – I think they were the same management. The name of the place at that time was ‘The Scrumpy-Dump Cinema’ {no, I’m not kidding – check the newspaper movie directories from 1973-74 if you don’t believe me!]. They played what were called at the time black exploitation films. A projectionist who worked at my theatre and also at this one told us that the balcony or some other area was structurally unsound and only the main floor was being used. I’m sure when the Agora took over a lot of money was spent to upgrade the place.

The WHK Building is a very wide building – the lobby of the office building was at the east end with the address of 5000 Euclid Ave, auditorium at the west end of the building was listed as 4900 Euclid Ave on the Scrumpy-Dump ads.

Sometime after the real Hippodrome was down and the rubble taken away in 1975, the Scrumpy-Dump name was changed to New Hippodrome.

The “New Hippodrome” existed around 1983. I remember seeing Matthew Broderick’s “Project X” at that theatre in 1983. However, that theatre was short-lived, since the Agora took over the theatre a year or so later.

I’m sure you’re right about the Scrumpy-Dump being at 105th St. at that time and I’m off with the years. I was aware of some odd theatre up there, although I had heard it was set up in the lobby of the Keiths 105, but I wasn’t familiar with that area in ‘72. Maybe it was the mid to late 70s that they knocked down that whole block to build some kind of state facility. It was after that area was cleared that the Scrumpy-Dump went into the WHK auditorium. I used to take the #9 bus from Mayfield Heights to downtown and pass the WHK Bldg. and there was a Scrumpy-Dump sign on it, not a theatre marquee, and I remember thinking “What a cheesey-looking sign for a theatre”. The Scrumpy-Dump only advertised sporadically – they were apparently on a shoestring budget and didn’t always participate in the co-op advertising campaigns. I remember passing there at some later point and noting that the Scrumpy-Dump sign had been replaced with a better New Hippodrome sign, but I can’t pinpoint the year. I came here to New York in the early 80s and kept up with some things through friends and the newspapers.

This is sort of off topic, but why were there so many theaters in the Euclid/105th neighborhood? There were more theaters there than in Playhouse Sq. downtown. So the original Scrumpy Dump was in the theater lobby? That must have been a big lobby!

If this is still operating, even as a nightclub, then the status should be changed to “Open”.

The Agora took to being at that theater due to the fact that the original Agora burnt down in I believe 1980 or 1982.

The February 23, 1952, issue of Boxoffice lists the Metropolitan as one of two Cleveland theaters that had been converted to broadcasting studios. The other was the Esquire.