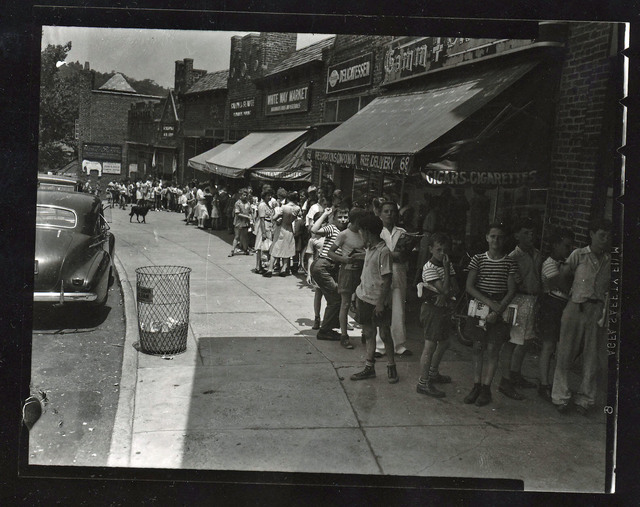 The original Scarsdale Picture Theatre opened on November 22, 1920, with the exhibition of the D.W. Griffith drama, “The Love Flower”, and continued operating, featuring vaudeville acts and silent films, until closing after the stock market crash of 1929.

In 1931, after a half-million dollar investment by RKO, the theatre was reborn in its permanent location on Garth Road in Eastchester, near the Scarsdale border, as the Scarsdale Theatre. Designed by architects C.W. and George L. Rapp, the Art Deco style theatre seated 1,149 and featured unique wood detailing on its marquee and interior.

The theatre, which had, in 1942, featured a live performance starring Ethel Barrymore and Gloria Swanson, and was allegedly frequented by Paul and Linda McCartney, John Lithgow, and Judy Garland with daughter Liza Minnelli, was closed in 1988.

The theatre reopened for a time in 1996 and 1997, last featuring “Air Bud” before being shuttered for good. Despite the attempts of some locals to preserve the historic theatre, it was razed in 2002 to make way for Scarsdale Commons, a $15 million, 42 unit luxury apartment complex.

I grew up next door to the Scarsdale Plaza, waiting for each Saturday to watch the cartoons, followed by a great “B” western, The Blob, or “the Monster from 20,000 Fathoms.” But alas, the theater closed in the early 60s only to reopen briefly in the early 70s to show “The Devil In Miss Jones” for an extended run of about 6 months (the theater was rented by the producers of the film). I moved away shortly after, when I returned to Westchester, I moved to Peekskill and got involved with the Paramount (the sister theater to the Plaza) which HAS been totally restored to its original glory, to bad we had to lose this other jewel!!!!@#$#@$@$!@$!@%$%
Thom from Peekskill

I am shocked at the demoliton of the Scarsdale Plaza! First time I went there was to see 1979’s “ALIEN”. After that, I’d gone many times, enjoying the 99 cents and dollar fifty admission prices. Another movie I’ll remember seeing there was when the theater was about to close – “BIG” with Tom Hanks.

The theater had a really lovely art deco design, as most all of them did built in the ‘20s to '30s. It’s too bad they are nearly gone, since it was a part of America, when movies were in their glory, still some of the best motion pictures ever made shown in them!

I loved the side church-like stained glass window effect, the dark, cozy feeling the theater gave patrons. You don’t have this today at all, even with the comfort of stadium seating. It’s more like a box now, small, medium and large, no personality. The screens are big, great sound system, I suppose, but for the environment around you, to have little or nothing – perhaps some real cheap renderings – it’s really a shame. Young people will never know what it was like.

I also will miss the reasonable prices of popcorn and candy!

It was always great going into the nearby pizza place, meeting people, all of us going to the movies. I can still remember some of the faces, even strangers. Those who ran the place were very polite, always giving people a warm welcome. There were never any problems with the young people there, that I noticed. It was all fun, whatever it was they did out of the ordinary – an expression of how glad they all were going there. It was great seeing families there – the children, when there were pictures for them playing there.

I have yet to drive by where the theater was, and I’m sure I will receive a real shock! So many worthwhile, historic places are being demolished for luxury condos. They almost did it with the Market Diner in New York! They have a ‘stay’ of about three years! It’s 1963 again, that diner. The Scarsdale Plaza will always be to me, the ‘30s, '40s up to the '80s. Now Scarsdale and Eastchester people will have to go to the Fine Arts theater in the area, or what’s on Central Avenue in Yonkers. Those theaters are beginning to look old-fashioned now – even United Artists Movieland, I mean Regal. Central Plaza was rumored to go multi-theater, beyond the four it is now. I’m glad it hasn’t. I see movieland being replaced before Central Plaza, perhaps with the modern multi-level stadium-effect. One of the first multi-threater complexes out in Commack, LI is due to be razed, replaced with one like Holbrook! So much of what I’ve enjoyed so, in movie going, is being taken away. At 65, it is not easy to have to adapt to these changes. Well, I can always have my memories, right? Memories of the Scarsdale Plaza too! It was so great, and a savings! Well worth spending the gas to get there, well, when gas was under a dollar a gallon!

I worked as an usher there during the summer of ‘85.. the films were dirt cheap, and the place was always packed on the weekends.. There were the usual problems with pest control.. Rats in the cellar, etc,

It had a huge staircase leading to the balcony..overall one of the last symbols of enjoyable moviegoing that has long vanished.. in favor of the big, noisy multiplexes..

As a small kid about 1947 I remember the usherettes blouses said
“Skouras Theaters” on the pockets, which a parent told me meant the theater was controlled by 20th Century-Fox. Not for long, though, as the Studios were already under order of the Courts to divest themselves of their theaters. By ‘49 or so the place was dark until
Brecher reopened it in 1951 as “The Plaza In Scarsdale” named after his flagship theater in Manhattan. First film was “The Great Caruso"
and the place was packed!
It was the old theater, not a new one, but had been spruced up and looked good until the '60’s and '70’s when subsequent managements let the place go. Final nails in the coffin: the heating and AC systems went paws up, not meeting code requirements and that was that. A sad end, but what else is new?

In one of the histories of Scarsdale I read that the"Scarsdale
Picture Theater" was located at the northeast corner Of Popham Road
and Depot Place – the road leading to the Scarsdale Metro North
south bound railroad platform. It’s my conjecture that, besides the
oncoming depression of 1929, this theater’s demise was hastened by the cost and need to convert to sound movies.
The “new” 1931 theater that many of us remember was located across Popham Road and 300 feet or so going south up Garth Road, just over
the Eastchester border.

My cousin lived further up on Garth Road. I use to pass the theatre many times. I remember going there back in the 1990’s. Bob Miller gave excellent info.

In the late 1970s, the Scarsdale Plaza had an admission policy of 99 cents at all times. I remember they had a bowl of pennies at the box office to use for change.

Also, there are scenes in “The Muppets Take Manhattan” that were filmed in the lobby concession stand area of this area.

I grew up on Garth Road in the early 1970s and my Mother would walk me and my sisters all over the area. She took us to see films at this lovely theater on a number of occasions during this time…Disney classics such as SNOW WHITE and ALICE IN WONDERLAND, as well as first run of MAME with Lucille Ball. I remember seeing ‘one-sheets’ displayed for YOUNG FRANKENSTEIN and VOYAGE OF THE DAMNED (although I wasn’t taken to see those.) As a child, I always dreamed of buying and running vintage films in this theater. My heart truly broke when it was torn down to make way for yet more apartments. A beautiful part of Scarsdale and cinema history died when that was allowed to happen.

Come on fellow Scarsdale Plaza Theater fans. Don’t you remember: One Western Two cartoons A serial a feature and throwing popcorn off the balcony. We would wear our cowboy outfits to see Hopalong Cassidy. With real cap guns, remember those? Kids today just don’t know about real fun. Anybody for Playland?

Ben Schlanger was the architect of a redesign of teh Scarsdale Theater in 1950 and even helped develop its new screen (see photo).