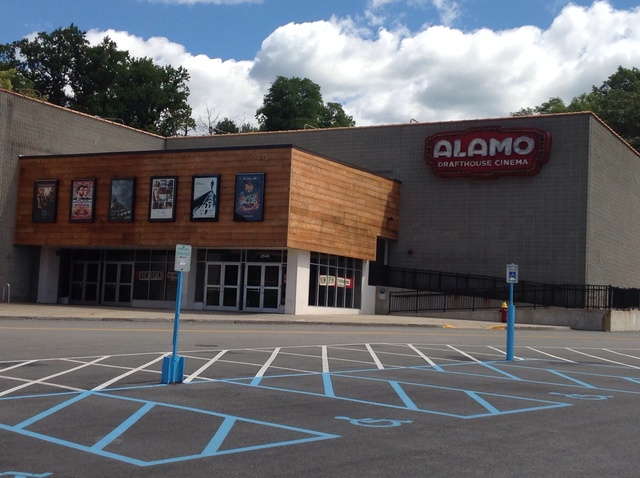 Opened on December 16, 1977 with 4-screens. Located in the Central Plaza Mall, this theatre is the next door neighbor to the Clearview Central Plaza Cinemas. Suprisingly this UA-Regal house is still well maintained both in and out.

It was closed for renovations in July 2012, and was taken over by the Alamo Drafthouse chain and reopened August 3, 2013.

Question: Noticed that this theater is running a few of the same films also palying up the block at Bow Tie Central Plaza. Does this mean as the newest theater here, Bow Tie now loses the distribution tracks of several major studios??? This is how it happened in the 1960’s with the advent of shopping center theaters , the downtown theater became second fiddle to the film distributors. Are the studios bound to the exhbitors with exclusive licensing agreements?? If you Google “Beech Cinemas vs. General Cinema,” you will see a past lawsuit against 20th Century Fox involving alleged collusion between exhibitors and studios here in Westchester County, NY. John J. Fink and Scott Neff, please chime in on this!!!

CORRECTION TO THE ABOVE:
Google: Beech Cinema vs. Twentieth Century Fox Film

Chill. Alamo is about upscale food & drinking so the same movies might play at both cinemas.

I think optimist008 is jumping the gun. Alamo is not playing a few of the same films. It’s only one “2 Guns” and I personally think this is an anomaly. When it was the Movieland 6 there were enough films for both theatres and with the Alamo’s policy of also playing art films this shouldn’t happen again

Bow Tie unfortunately departed from Central Plaza so Alamo can pretty much show whatever they want now. I had originally thought Alamo would be the place for genre kinds of films, while Central Plaza might get more family friendly stuff – even though Alamo does play both (in fact I spoke with families when I was the director a tech camp two summers ago in Austin and many families make the Alamo a theater of choice for a day out).

I had visited Yonkers opening night and had a good experience even if it wasn’t perfect (it was opening night – and they took 75% off our bill so I’m not complaining). They have pictures up on Facebook – and while they didn’t install Stadium Seating they made extensive lobby changes while keeping some of the vintage charm of this one painting the brick walls red and installing a theme (this one is Dr. Strangelove). Over all, like the locations I visited in Austin, this is first class operation.

Still I regret not getting to Central Plaza before they closed – I’ve been told much of the GCC charm is in tact :(

Time to change the old “Movieland” photo on homepage. I downloaded a new picture and more to come. I live this place

Please update, the theatre open around December 16, 1977 with Close Encounters. The theatre had 4 screens, expanded to six screens in the 1980s or 90s. If I can find something thru looking at old newspapers. There was NO GRAND OPENING AD in the New York Daily News or The Journal News. Guess BS MOSS didn’t advertize.