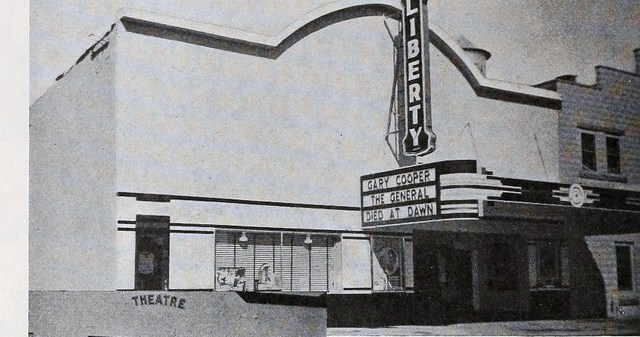 Dating from 1920, and remodeled in 1946, this once abandoned theater has a rather plain facade, but a very nice marquee. The vertical portion is rounded at the back, so it looks backwards. The horizontal portion is covered in narrow horizontal stripes, and I’m not sure where movie titles would have been displayed. At some point, the street level got covered in that nasty concrete with little pebbles stuck in it. In 2004, the theater looked pretty shabby, but salvageable.

By 2008, it had re-opened as a performing arts center.

The Liberty is now owned by a non-profit organization and is planning a restoration! I’ll try to submit some photos of the progress on it!

An encomium from the Liberty Theatre was published in an ad for the American Seating Company in the June 1, 1935, issue of Boxoffice. The writer praised the new seats the theater had recently installed, crediting them with an increase in patronage. Despite the modern front seen in the photos, I think the house must have been fairly old to have been getting new seats installed in 1935. The facade remodeling probably took place sometime later.

Boxoffice contains many references to the Liberty, operated for many years by P.A. Volkman. In 1939, Volkman built a second theater in Wapato, acting as his own designer. He named the new house the Dickon Theatre, combining the names of his two sons, Dick and Don. There’s a (rather belated) photo of it in the November 16, 1946, issue of Boxoffice.

According to an item in Boxoffice of March 30, 1957, Paul Volkman took over operation of the Liberty Theatre from his parents in 1933 and operated it until 1957. The purchaser in 1957 was C.A. Dunn. However, a February 21, 1953, Boxoffice obituary of Joseph Blaschke said the Blaschke had built the Liberty in 1920 and had run it until turning it over to his grandson in October, 1933.

The 1957 item mentioned that Volkman had earlier rebuilt and remodeled the Liberty. This rebuilding was covered in an October 7, 1946, Boxoffice article which said that Volkman was then in the process of rebuilding the house. The project was to include the addition of a 400-seat section of stadium seating. The wording of the article is imprecise, but the rebuilt Liberty was apparently to have 775 seats.

Corrected address for this theater is 116 E. Third St, Wapato, Wa. 98951. Google street view should then be correct.