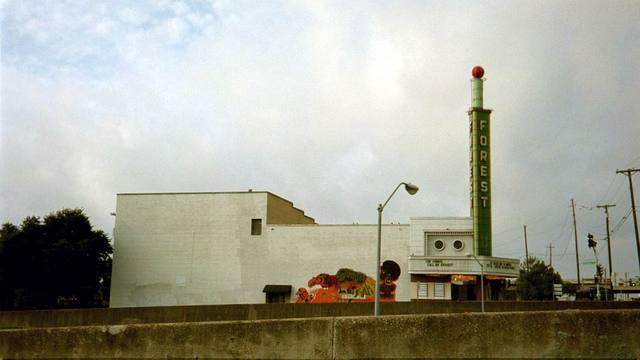 Located near the Fair Park district on what was Forest Avenue. The Forest Theatre opened July 30, 1949 with Ray Milland & Jean Peters in “It Happens Every Spring”. It briefly closed in February 1956 and reopened March 1, 1956 as an African-American theatre. By December 1958 it was operating on weekends only. It closed as a movie theatre September 27, 1965. It became a ballroom and later a nightclub. In 2003, it was being leased and hopefully rescued by recording artist Eryka Badu and was renamed Black Forest Theatre in 2004 which operated until 2008. It has a unique and magnificent towering vertical sign with lots of neon and the classic ball on the top, but sadly has been dark for many years.

The Forest Theatre is a remarkable example of the time when a builder would see how well something could be constructed rather than how quick. It needs work but is a survivor. The Forest Theatre is located in Dallas at Martin Luther King, Jr. Boulevard and Interstate 45.

The building appears to house a health clinic now.
April 2011

Does anyone here have more information about the Forest Theater( the name of the owner…) I am working on a documentary related to this theater and any info would much appreciated.. my email is .. Thx for your help

The Forest Theater was a Pettigrew-Morley & Company architected $350,000 property for the Interstate Theater Circuit designed to upgrade the former Forest Theater just blocks away. That theater would be renamed the Colonial Theater which Interstate would close shortly thereafter. Fiberglass screen by Nu-screen, ramp to the mezzanine instead of stairs, cry room, Acousticon hearing devices available for the hard of hearing, attached lit parking, and plush-back fitted seats were among the amenities. Between 4,500 and 5,000 people showed up to the opening events of the theater on July 30, 1949 which had square dancing and the film, “It Happens Every Spring.”

While the early days were kind to the theater business-wise, the theater staggered as the population shift was brisk. Interstate closed the theater briefly after the February 25, 1956 showings to covert the theater from a white theater to an African American theater beginning with a grand re-opening March 1, 1956 with “Helen of Troy.” It was billed as the largest African American theater in the South and ads carried the tagline, “now colored” for informational purposes. Early on, “The Ten Commandments” played for a month to large crowds and gave Interstate hope. But the business soon slacked off.

The Forest mixed in live rock and roll shows with the movies in search of audiences in 1957/8. But it wasn’t working so the theater began operating as a weekend-only establishment beginning in December of 1958 with new manager Victor Matthews. Somehow the Forest made it another 7 years — 16 years total — closing on September 27, 1965. Matthews said that support wasn’t there and the theater had operated for a loss for a lengthy period. So Interstate looked for subleasing deals.

The Forest was divided into a 900-seat house sometimes called the Forest Ballroom and later called the Forest Avenue Cinema. The other part was called the Central Forest Club and later the Forest Central Night Club. The first sublease arrangement appears to be with Reuben Willis who opened the Central Forest Club on October 13, 1967 operating primarily as a soul and blues nightclub. Willis booked acts including Redd Foxx and B.B. King into the night club. For Willis, the space was used as community center by day and night club by evening. That arrangement lasted about almost four years. Concerts West booked a few shows into the Forest Ballroom for a short period in summer of 1968. Wilson Pickett & Arthur Conley played the Club and The Byrds played the Forest Ballroom. One live show from 1970 at the Forest, the South Dallas All-Stars' Live at the South Dallas Pop Festival, was released years later as a live CD.

As for the property, Interstate held the Forest for 30 years. When Albert H. Reynolds bought the city block in 1979 housing the theater, the Forest transferred from the original owners, Interstate Theaters (then known as Plitt Southern Theatres) to Reynolds. The Forest Avenue Cinema used the 900-seat house to show blaxploitation films for less than a year to incredibly small audiences and a 485-seat portion operated as the Forest Central Night Club. (This could account for the 478 number that is referenced in some comments.) In the 1980s, the Forest was a night club called, City Lights under Tommy Quon. Delbert Knight was the next operator. Club Anthony was an R&B club that functioned for two years.

In 1991, now as a jazz club, the nightspot moved back to its original name of the New Forest Theatre booking Ramsey Lewis and Les McCann. Further bookings included Tuck and Patti but the New Forest closed in September of the same year. It had long stretches of vacancy. When singer Erykah Badu of Dallas bought the theater in 2003, it needed refurbishing. It became known as the Black Forest Theater in 2004, a reference to its operation as an African American house in 1956-1965. Film-wise, the Black Forest returned to its roots with the Black Cinematheque and Juneteenth Film Festival. But live music and community center activities were the main attractions for the space. The Black Forest Theater was used from 2004 until 2008. As of the 2010s, the Forest still stands with its original marquee.

Last I was in the area (a couple of months ago), this Theatre was for $ale! RAC Photography 8-)

In November of 2015, the Dallas Landmark Commission voted to initiate the landmark designation process and the long-vacant property was under contract with a potential buyer. So there’s hope for the Forest.

March 1st 1956 photo added from the collection of the Texas/Dallas History and Archives Division of the Dallas Public Library.

Larger image of the same photo in this link.

Has anyone bought it yet ?