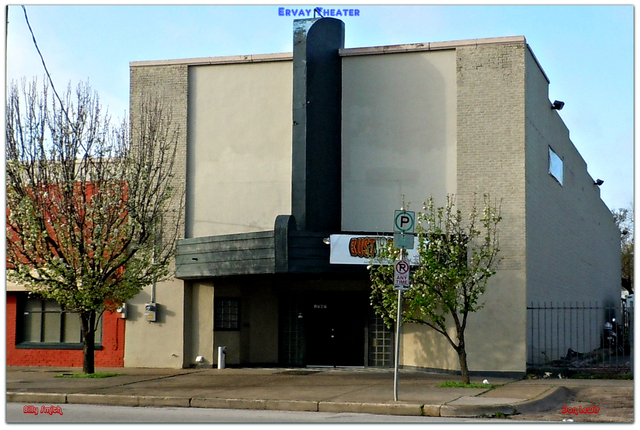 The Ervay Theater was opened in late-1946. It was last operated as the Paris Art Theater, screening adult movies. In the mid-1970s the Ervay Theater stood painted over in one color. However a marquee sheltering the entrance was still visible along with a vertical form that had possibly been the location of the theater’s name. Also visible were where outside movie poster frames had been located on each side of the entrance.

A mid 1970s photo of the Ervay Theater in Dallas.

A old movie theater ad from 1949 for the Ervay Theater.

From the mid 1970s, a photo of the Ervay Theater in Dallas.

Chuck, do you have any info on this theatre that might possibly identify it as having originally been the Encore Theatre?

Never mind – I just checked and the Encore was at 4519 Maple. What did it become?

The Ervay is probably best remembered for its owners and customers and not so much for its presentation. It was opened by three ex-GIs who didn’t even place an ad for the Dec. 21, 1946 opening. It was operated for a short time by the notorious Jack Ruby in 1953. And it became the Paris Art Theater owned by Jim Sharp who was thrown in jail in 1971 for showing obscene movies at the theater and was also operated by the infamous Charles Musick.

Musick fought Dallas' enforcement of obscenity laws using the First Amendment in the early 1970s. He was charged 22 times with showing obscene films at the Ervay and another 20 or so theaters in the region and had 21 of the cases either quashed or dismissed. Musick appears to be the final operator of the establishment for film exhibition with ads ceasing in July of 1972 and the Paris Theater nameplate being used on Harry Hines thereafter. Musick became the key witness in the murder for hire case against fellow adult theater owner Robert C. Thetford’s murder for hire case revolving around Thetford’s IRS problems and having one of his employees murdered for revealing this to the IRS.

Following its adult film era, it became a live venue mostly for music in the 2000s. The last advertised music show there was The Cliks live concert in March of 2008. It has been used seldom since for live concerts but has been used for political talks, seminars and courses into the 2010s.