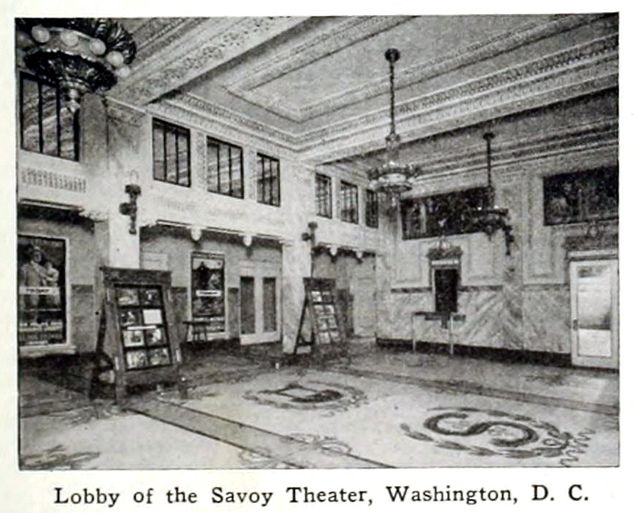 The Savoy Theatre was built in 1913 on 14th Street, in the Columbia Heights area of Washington. The architect, B. Stanley Simmons designed the facade in a stylized Colonial Revival design, with the three false windows on the second floor surrounded by simple terra-cotta decor, including garland swags and lion’s heads. Over the large cornice was a large inscribed rectangle for the theater’s name (although the name was never inscribed).

The Savoy Theatre’s 1,400-seat auditorium was elaborately decorated and the lobby walls were lined with gilded mirrors and green marble. The lobby floor resembled an ancient Roman mosaic, with a huge “S” in the center, inside a lyre. Originally, an open air second theater space was adjacent to the Savoy’s main entrance, though this later disappeared. Before air-conditioning, during the muggy summer season, audiences could watch silent films in shaded comfort.

Unfortunately, the theater fell into decline during the 1950’s and 1960’s, and was set ablaze during the 1968 riots. What remained of the Savoy Theatre was torn down three years later, and today a subway station is on the site.

Here is the open-air theater:
http://tinyurl.com/mz9uqh

did the roof the Savoy Theater, Washington, DC collapse after a snow storm – in the earlier years of the theater?

I think you are thinking of the Ambassador, which was called the Knickerbocker when the roof collapsed in 1922. Killed 98 people. Rebuilt and call the Ambassador after that.

I have loaded two pictures. I must thank Ken Roe in solving the mystery of where they are of…. :o)

Whats the name of the subway station there now on the site of the Savoy Theatre?

Appears to be Columbia Heights Station.