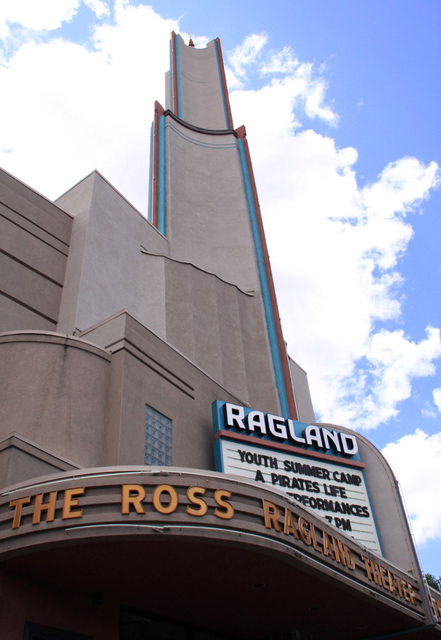 The Esquire Theatre was opened in 1940. This 790 seat community theatre was saved from the wrecking ball in 1989 by three kindly old men. The Ross Ragland Theatre was named after one of those great men in Klamath Falls, Oregon. Klamath Falls used to have several vaudeville houses.

Is this the only historic theater in Klamath Falls?
Was it ever called the “Tower”, or just the “Esquire”?

TC:
Is the photo after restoration?

Here is a photo of another theater called the Rainbow in Klamath Falls. The date is 1941:
View link

This 1944 photo shows a partially hidden marquee which appears to say “Street” as part of the thater’s name:
View link

My guess on that last name is either plain “TREE” or “THE TREE” or maybe “PINE TREE” as clearly there isn’t another letter after “TREE” (so it can’t be “STREET”), because there is a dividing band above the “T” and whatever letter (if it is one) or decorative object is above the “T”; and also because up and down the right side of the sign there are little triangular tree symbols, like Christmass trees. Klamath Falls was after all logging country.

You may be right on that, upon further review.

Was Ross Ragland any relation to Rags Ragland, the vaudeville and burlesque comic and clown of the 1930s and 1940s?

This was George M. Mann theatre when it opened in 1940. William David, of San Francisco, was credited as the architect. The interiors were by Miguel Santocono, “noted decorator,” who worked on the murals for three months, according to newspaper accounts.

I’m curious too and wonder if Ross is related to film comic Rags Ragland?