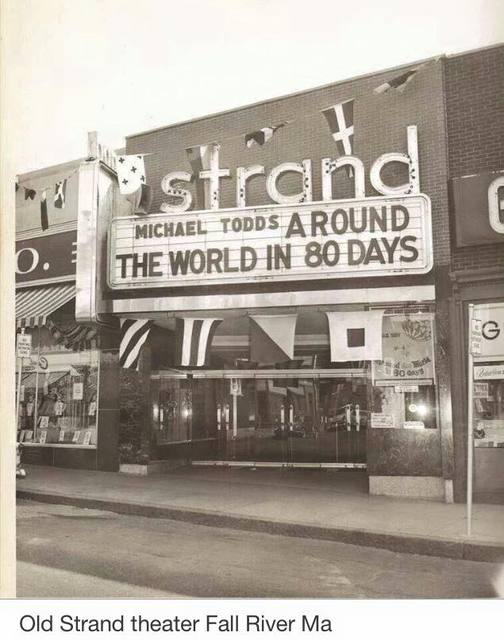 A hidden gem far from the downtown district on Pleasant Street in the Flint section of Fall River. The Strand Theatre was opened prior to 1927 and was designed by architectural firm J.M. Darling & Son. Seating was provided for 1,564 in orchestra and balcony levels. In 1948 it was remodelled to the plans of architectural firm William Riseman Associates. The interior was gutted and the balcony removed, giving a reduced seating capacity of 1,080.

It was a very family-friendly movie house that always offered 10 -count them - 10 Warner Brothers ‘Looney Tunes’ cartoons before the double feature. It had lower admission prices than the downtown palaces; even lower than the rather rowdy Plaza Theatre on North Main Street.

The MGM Theatre Photograph & Report form for the Strand has a facade photo taken in May 1941. There’s a boxy marquee with 3 rows of white letters on a black background. Movies are “Pride of the Bowery” and “The Man Who Lost Himself”. To the right of the entrance is a Woolworth’s store. The address is 1363 Pleasant St. The Report states that the Strand has been showing MGM product for over 10 years; that it’s over 15 years old; that it’s in Fair condition; and that it has 1227 seats on the main floor and 270 in the balcony; total: 1,497 seats. The type of patronage is listed as “low income”.

The Strand Theatre opened on Tuesday evening, March 13, 1918 and was Fall River’s first neighborhood movie house. The opening film was The Turn of a Card, starring J. Waarren Kerrigan and Lois Wilson. The reporter who covered the Strand premiere was so impressed by the excellence of projection that he commented, “…a great deal of eye strain was saved by the absence of the exhausting quiver whjich accompanies most motion pictures.” Guest speaker at the opening was William C. Gray, president of the Board of Aldermen.

The Strand was remodeled during the summer of 1922. In 1948 the Strand was completely remodeled and redecorated and furnished with new equipment. The modernistic lobby with marble and formica terrazzo floor had reputedly the largest mirrored wall in Southern New England. New push-back seats were installed in the auditorium. The new theatre was entirely on one floor. Six solid glass doors were installed. The first program for the “new” Strand on September 4, 1948 was Fighting Father Dunne and The Noose Hangs High The Strand was then a Nathan Yamins theatre under the supervision of Norman Zalkind as director and Herman Duquette as house manager. Israel T. Almy of Fall River was the architect, and William Riseman Associates of Wrentham the designer and decorator. (Information gleaned from articles in the Fall River Public Library “Theatres” folder.)

On March 24, 1970 the Strand, then known as Cinema I Theatre, was among the 1,000 theatres in 300 cities which participated in a one-only showing of a full-length motion picture dealing with the life and work of the late Dr. Martin Luther King. The film was called King: A Filmed Record…Montgomery to Memphis. It was intended in part as a fundraiser to advance the slain civil-rights leader’s causes.

Article, with photo, on the re-opening of the restored Strand Theatre in 1948. Boxoffice magazine, September 18, 1948:
View link

The Strand is listed in the 1927 Film Daily Yearbook as having 1200 seats and open daily.

Of the 10 Fall River movie theaters listed in the 1927 FDY, the only one I couldn’t find here in Cinema Treasures is the Globe (500 seats, open daily).

As of 2010 it appears to be still standing as a furniture store. A long lobby leads to an auditorium way out back behind the neighboring retail buildings. Looks rather long and narrow – not much of a stage house on it – that may have been removed during the 1948 remodeling.

Here is some additional information on the Strand. It closed for renovations in 1967, an later reopened as the Cinema I. The first movie that played there after it reopened was The Graduate. Right after it closed completely years later, another theater with the name Cinema I opened on South Main Street. It was very small, showed mostly adult movies, and was only in business a short time.

The google photos in 2019 show the building still standing, but appears vacant (although in good shape)