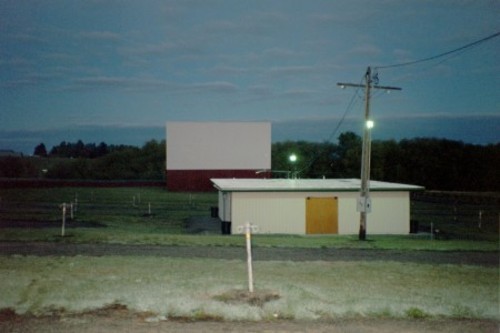 This drive-in opened in 1955, closed in 1986, and was reopened in the late-1990’s. It’s the only operating drive-in in central Idaho. (There are none left in northern Idaho; all the others are in the southern part of the state.)

The Sunset Auto-Vue Drive-In may enjoy a unique status in that its marquee is several miles away from the actual drive-in. There is no signage of any sort at the site itself. However, the same owners operate the historic Blue Fox Theatre (built in 1930) in downtown Grangeville, and they use the left side of the marquee to advertise whatever double feature is showing at the Sunset Auto-Vue Drive-In.

The drive-in is open weekends only, May through October. Speaker poles still fill the lot, but the transition to FM sound was made some time ago. Despite the lack of signage, the wooden fences separating the lot from the highway are colorfully painted. You can see hills and mountains from the lot, which is immediately surrounded by farmland, so it’s a very pleasant setting. It’s on the road to a ski area near the town of Mount Idaho, but it’s off the two major highways that go through Grangeville, so expect to stop and ask for directions!

If you surf the web, you can easily find a story that was done on the reopening in Boxoffice magazine, which includes a photo of the screen in its dilapidated early-1990’s state. It explains that the family that owns the Blue Fox Theatre became frustrated at being only able to show one picture a week, and it came to them that by refurbishing the old property, which they still owned, and putting on double features, they could have three films running a week, in the summer, at least.

They don’t have much competition; the nearest open theatre to the south is the Roxy Theatre in Cascade, a two and a half hour drive, and the closest to the north would be the Liberty Theatre in Lewiston, more than an hour away. On January 13, 2020 high winds blew the screen down. In May 2020 a new screen was being installed.

This is a cool drive-in, although in a remote part of the state. The screen blew down in January of 2008. Instead of closing down, they bought a new Selby tower. The snack bar has good food & prices.

The screen faces west, so while waiting for the movie, you might get to watch the sunset. Hence, the name.

Why is the marquee several miles away?

In looking at a Google Street view of the Blue Fox theater the marquee for it does not have a separate location for the DI movies. Unfortunately the current Street View is from March of 2011 so no DI advertising is on it to see how they set it up. According to the directions it is 1.5 miles from the DI.

The January 13, 2020 Lewiston Tribune reports that high winds have destroyed the screen, and that the owner plans to rebuild.